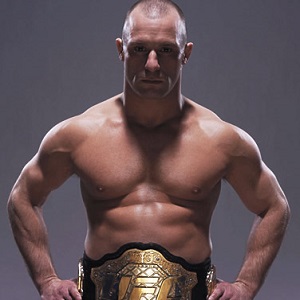 Jiu-Jitsu is my therapy, my passion, my life

Keep your eye on the prize but enjoy the journey

Good thing it's a fight and not a modeling contest or you'd be f#cked.

Matt is a married person. He is currently married to his wife, Ann. The couple tied the knot on May 26, 2007.

It was 4 days after he retired from his professional fighting career. The lovebirds have an incredible bonding with each other. They have two children together. Both of them are daughters and they were born on February 11, 2009, and in April 2011.

As of now, the couple along with their children resides in Massapequa, New York.

Who is Matt Serra?

Matt is a retired Mixed Martial Artist. He is a professional practitioner of Brazilian Jiu-Jitsu. Matt was active in this MMA field from 1999 to 2013. He is also known by his nickname, “The Terror.” As per his professional MMA record, he has listed 11 wins out of 18 matches. Furthermore, he won “Pan-American Championship” in 1999.

Presently, he serves as an MMA analyst for Fox.

Matt was born in East Meadow County in the state of New York. Born on June 2, 1974, he is 42-years old as of now. He possesses American nationality and Italian ethnicity.

He was born to Italian-American family. Matt was interested in fighting at a young age. He learned Kung Fu from his early period of his childhood. Afterward, at the age of 18, he started learning Brazilian Jiu-Jitsu.

There is no record of his school or college life available to us. Knowing he started fighting from a young age, we can assume he didn’t go to college.

Matt started working on his fighting career since his early childhood. He began learning Kung-Fu from a young age. Afterward, when he was 18, he started learning Brazilian Jiu-Jitsu. These skills helped him build his career on fighting.

In 1999, he won the “Pan-American Championship”, which is the largest Brazilian Jiu-Jitsu tournament held in North America. Furthermore, he went on to compete in various championships like “ADCC Submission Wrestling World Championship”, “The Ultimate Fighter”, and others. He went on continuing his MMA career and joined UFC. Matt has listed 11 wins out of 18 matches, as per his professional MMA record.

Matt Serra: Salary and Net Worth

He has a net worth of $700 thousand but his salary is not revealed yet.

Other than that, there are no rumors surrounding his personal and professional life.


Matt Serra has the height of 5 feet 6 inches. His body weighs 77kg. He has dark brown hair and dark brown eyes.

Also know more about the early life, career, net worth, relationships, and controversies of other like a professional fighter  Guilherme Vasconcelos, Ben Askren, Terence Crawford, and Artem Lobov.