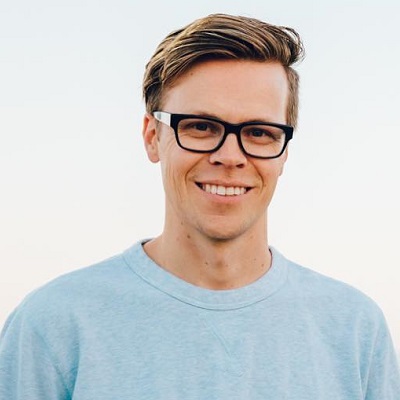 Matt Slays is a married man. His wife is an actress and YouTube personality Rebecca Zamolo. Matt and Rebecca first met during a music video shoot. In the video, Rebecca happened to be one of the cheerleaders.

In the first meeting, they were drawn to each other. Then they started dating each other. After dating for over a decade, they eventually exchanged vows on the 17th of May 2014.

Since then, the couple leading a happy married life.

Who is Matt Slays?

American Matt Slays is a YouTube Personality. He is renowned for his vlogs with his wife, Rebecca Zamolo that went viral on the web.

Also, he is a singer and a lyricist too.

Matt Slays was born on the 17th of July 1980 in Pueblo, Colorado. His real name is Matt Roy Yoakum. He is of British ethnicity.

To date, he has not shared any details on his father and mother. He is the second among his three siblings including two brothers and a sister.

Talking about his educational background, he is a graduate of Western Oregon University in Oregon.

Since his childhood, Matt Slays had been in the love of music and performing. Later, he appeared in the show, Making the Band. The primary objective of the show was to make the boy band, O-Town. However, he could not make it to the band.

Later, he joined the band named, Townsend. For the band, he worked on various music projects. Moving forward, he left the band as started working for Hilton Hotels. For the hotel, he worked for around six years. Despite working for a hotel for six years, he could lose his passion for music. Hence, he made his comeback in the industry.

After that, he joined associated with the show, American Idol. In the show, he used to conduct auditions on the musically. Also, he worked as a sound technician and a cast member for Disney world.

Later, in 2015, he came into the limelight when he started making his appearance on the YouTube channel, Matt and Rebecca. The major content of the channel was their adventures as Ggaints DIY Projects, Adventure Vlogs, and 24 Hours challenges. In the current date, the channel has around 4.59 million subscribers with over one billion views.

Despite turning to a YouTube Personality, he is still passionate about songs like Over My Head, Purpose, Feel the Rain, and Hashtag My Life.

As of 2020, he has an estimated net worth of $1.5 million. Through his YouTube channel, he makes in the range of $1.55k to $2.5 million. Apart from that, he also makes through his singing career too.

Talking about net worth, he is not only the millionaire in the family. His wife, Rebecca has an estimated net worth of $10 million.

As of now, he has managed dignity as a YouTuber. To date, he has not been through any sort of controversy that created a buzz in the media.

Also, there are no rumors related to him.

Matt Slays has brown eyes with brown hair. However, he prefers to highlight it with Auburn color. He stands at a height of 5 feet 9 inches and weighs around 65 kg.

Talking about his appearance, he has a charming persona with an oval-shaped facial structure. Also, he prefers to have a clean-shaven look.

You may also read the bio of Peter James Hollens, Dan Brown, and Erin Sanders.