Matt Smith is an English actor who is best known for his performance in the BBC series ‘Doctor Who’ as the eleventh incarnation of the Doctor. His girlfriend is Lily James.

Matt Smith is currently in a relationship. He is dating English actress Lily James since 2014. They met for the first time on the set of ‘Pride and Prejudice and Zombies’. In March 2018, he revealed that he would love to start a family very soon. 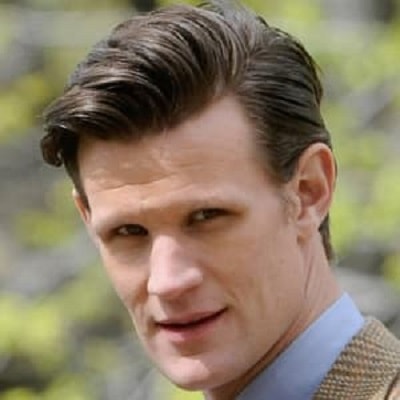 I always steal a pair of socks on every photo shoot I do. It's my thing.

Time travel is such a magic concept.

I'm not handsome enough to be James Bond. Maybe a villain, though.

Who is Matt Smith?

Matt Smith is an English actor who is best known for his performance in the BBC series ‘Doctor Who’ as the eleventh incarnation of the Doctor.

Also, he won Primetime Emmy Award-nominated for his performance as Prince Phillip in the Netflix series ‘The Crown’.

He was born on October 28, 1982, in Northampton, England. He was born Matthew Robert Smith. Matt was born to parents Lynne and David Smith. He has a sister: Laura Jayne who was one of the dancers featured in the well-known music video for Eric Prydz’s 2004 song ‘Call on Me’.

Matt holds British citizenship but his ethnicity is English.

He attended Northampton School for Boys and then attended the University of East Anglia in which he studied drama and creative writing and graduated in 2005.

He played football with the hope of pursuing a football career but he quit owing to a severe back injury. After that, he stepped into the field of acting. He took training at the prestigious National Youth Theatre in London.

He debuted his on-screen performance from the BBC telefilms ‘The Ruby in the Smoke’ in 2006. After that, he appeared in ‘The Shadow in the North’ in 2007. He depicted a major role in the BBC TV drama series ‘party Animals’ in 2007.

Likewise, Matt Smith has made his breakthrough from the role as the eleventh incarnation of The Doctor in the BBC Sci-Fi series ‘Doctor Who’ (2010-14). He announced on October 7, 2013, that he would portray Patrick Bateman in ‘American Psycho’ at London’s Almeida Theatre.

Similarly, he appeared as price Philip in the Netflix royal drama ‘The Crown’ in June 2015 in which he played the role for the series first two seasons.

Moreover, he appeared in movies which include ‘Womb’, ‘Lost River’, ‘Terminator Genisys’, ‘Patient Zero’, and ‘Mapplethorpe’.

As of 2022, he has an estimated net worth of around $10 million and he has earned that sum of money from his professional career.

There was a rumor that he and his girlfriend, Lily James were engaged as she was seen wearing a large diamond ring at the BAFTA Awards ceremony but neither of them confirmed the rumor.