Matteo Pessina is a footballer renowned for playing as a midfielder.

To date, he has not shared any details regarding his love life and romance. 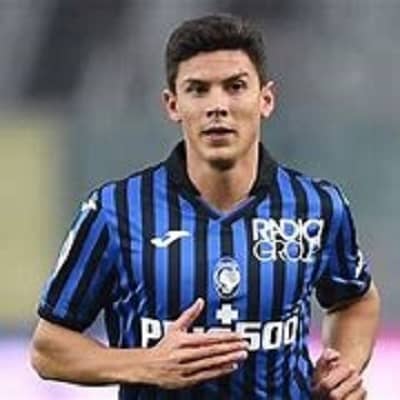 Who is Matteo Pessina?

Matteo Pessina is a professional footballer. He is renowned for playing as a midfielder in the Italy U20 that finished in third place at the 2017 FIFAU-20 World Cup.

Currently, he is playing for the Atlanta B.C. and Italy national football teams.

He was born on 21 April 1997 in Monza, Italy. Furthermore, he is of Caucasian ethnicity and holds Italian nationality.

To date, he has not revealed any details related to parents and education qualifications.

In 2014, Matteo Pessina started his professional career as a football player at hometown club Monza. However, he joined the Milan Club in 2015. With the club, he was loaned out to Leece, Catania, and Como.

After that, he signed a contract with Atlanta on 2017, July 7. However, he signed on loan by Spezia on 25 August.

Besides that, he joined Hellas Verona on loan in 2019.  On 10 February 2021, he played against Napoli in the second leg of the Coppa Italia semi-final. He scored 2 goals in a 3-1 and won and which allowed Atlanta to progress to the final.

Initially, he has played in a team of the Italy U20 side and finished in third place at the 2017 FIFA U-20 World Cup.

Pessina scored his first goal for Italy in the 75th minute of a 7-0 and win against San Marino. Then, he scored the second goal in the 87th minute.

He has an estimated net worth of $5 Million through his career as a soccer player.

It was reported by The Washington Post that he was called up as a late substitution for the injured Stefano Sensi. It has occurred in the Italy squad for the upcoming European Championship.

Moreover, Sensi aggrieved a muscular injury in training and the midfielder has struggled with injuries all season. The Italian soccer federation set forth that Pessina would replace Sensi after getting the green light from UEFA’s medical commission.

Later, Pessina played for Italy and had been included in the provisional 28-man squad for Euro 2020.

The 24 years old soccer is a hazel brown-eyed and black hair man. His height is 6 feet 1 inch and weighs around 77 kg.

Moreover, he has short hair with slightly growing facial hair.