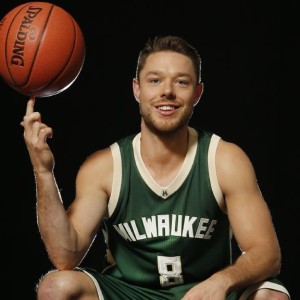 Matthew is a married man. He is married to his longtime girlfriend, Anna Schroeder. She is also a sportsperson and she played volleyball. They met in St Mary’s college so they are college sweethearts. The couple tied the knot on 1 July 2017. They announced their engagement in 2016.

They have a son Anders Ralph Dellavedova born in November 2019.

The couple is living happily and living together.

Who is Matthew Dellavedova?

Matthew Dellavedova is an Australian basketball player. He plays for the Milwaukee Bucks of the National Basketball Association (NBA). He won an NBA championship with Cleveland Cavaliers in 2016. In 2012, he was WCC Player of the Year.

Matthew Dellavedova was born on September 8, 1990, in Maryborough, Victoria, Australia. His nationality is Australian and his ethnicity is Italian Australian.

His father grew up playing Australian rules football and his mother was also interested in sports and played netball. Dellavedova began playing basketball at the age of four. He played for the Maryborough Blazers and Bendigo Braves in his early days.

He went to the Australian Institute of Sports for three years. For his academics, he attended Saint Mary’s College in Moraga, California. He graduated with a degree in Psychology.

In July 2014, Dellavedova re-joined the Cavaliers for the 2014 NBA Summer League. On 9 November 2014, he was ruled out for four to six weeks with a sprained left knee (MCL) that he sustained in the fourth quarter of Cleveland’s loss to the Portland Trail Blazers on 4 November. In December 2014, she returned from injury to face Brooklyn Nets.

Matthew re-signed with the Cavaliers on 29 July 2015. On 19 November 2015, he recorded 7 points and a career-high 13 assists in a 115-100 win over the Milwaukee Bucks. Four days later he had a season-best game starting in place of injured guards  Kyrie Irving and Mo Williams.

In January 2016, Matthew was voted the “dirtiest player in the NBA” in a poll of 24 fellow players, coaches, and assistants conducted by the Los Angeles Times, receiving 13 votes (appearing on the ballot of more than half of those that voted. On 18 February, he returned to the lineup after missing five straight games with a strained hamstring.

Matthew went on to help the Cavaliers defeat the Toronto Raptors on 27 May in Game 6 of the Eastern Conference Finals. The 4-2 series win advanced the Cavaliers to their second straight NBA Finals. In a Finals rematch with the Warriors, the Cavaliers became the first team in history to win the championship after being down 3-1 in the series.

On 7 July 2016, Matthew was acquired by the Milwaukee Bucks in a sign-and-deal with the Cleveland Cavaliers, in which Cleveland received a $4.8 million trade exception and the rights to Albert Miralles, while Milwaukee also received cash considerations. Matthew’s contract gave him $38 million over four years.

Matthew made his debut for the Bucks in their season opener in 2016, scoring 11 points in 29 minutes started in a 107-96 loss to the Charlotte Hornets. In December 2016, he scored 12 of his season 12 of his season-high points in the fourth quarter of the Bucks’ 112-103 win over the Brooklyn Nets. After starting all 30 games begin the season, he missed five straight games in late December and early January with a strained right hamstring.

Dellavedova has a Net worth of $1 million and his salary is approximately $800 thousand per year.

Matthew’s Milwaukee Bucks Trade rumors are flying everywhere right now. So much so that the one that dropped a few days ago largely flew under the radar.

Matthew confirmed that it was just a rumor and nothing more than that.

Matthew Dellavedova has a height of 6 feet 4 inches. His body weighs 90kg. He has light brown hair and blue eyes.