NHL player Matthew Stajan is married and a father of one.

Matthew Stajan is married to Katie Stajan since 2013. Matt and Katie have a son, Emerson Stajan who was born in 2015.

Earlier in 2014, their first child Elliot died a short time after his birth, and Matt’s ice league, the Calgary Flames extended Mr. and Mrs. Stajan all their heartfelt support.

To commemorate the memory of their first child Elliot, Mr. and Mrs. Stajan organized an event and raised funds in support of neonatal intensive care at Calgary’s Foothills Medical Center, Alberta, Canada.

The event was called “A Night Under the Stars”.

The Stajan family lives in Calgary, Alberta, Canada, the home of Calgary Flames where Matt Stajan played some of his most memorable games. 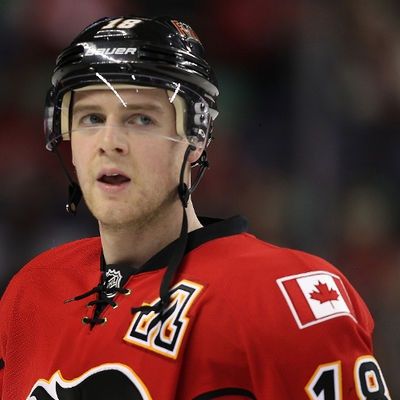 Matt said of the birth: “It’s obviously emotional for any parent, but with all the thing we went through– you only know heartache, so you’re nervous and scared. So when he came out, it was so emotional.”

"The Emerson Goal-we still have that puck framed now and it’s in Elliot’s room – we have a plaque for it,"

"We're so happy to be back. Toronto is where I grew up, we have family and friends and that's the hardest part about not being in Ontario, but this is home for us now. We just love it here."

Who is Matthew Stajan?

Matthew Stajan is a Canadian ice-hockey player who was awarded the Ralph T. Scurfield Humanitarian Award. As a professional hockey player, he played in Canada, America and topped his final season with Germany.

Matthew Stajan is a well-recognized name and spokesperson for Canada’s charitable organizations like the Alberta Children’s Hospital, Alberta, Canada.

Mississauga is situated on the shores of the beautiful Lake Ontario, the Regional Municipality of Peel, Toronto, Canada. Stajan’s older sister is Michelle Stajan.

His parents are Mike Stajan and Nana Stajan. Mr. and Mrs. Stajan both are of Slovenian descent. Matt’s grandfather Ludic Stajan was the founder and manufacturer of fire doors. This was later inherited by  Matt’s father and uncle.

Matt’s uncle Robert Stajan also was an ice-hockey player and wore the #14 uniform number. Robert later died of cancer when Matt was still very young. So Matt would go on to wear the same #14 throughout his career with the Maple Leafs, in honor of his dead uncle Robert.

Till 2000, Matt played minor hockey in his native Mississauga, Ontario with the Greater Toronto Hockey League as a member of the Toronto Red Wings and Mississauga Senators Association.

In 2000, he was drafted by the Belleville Bulls in the Ontario Hockey League, OHL Priority Selection Draft, and played three seasons between 2000 and 2003, scoring 206 points in 182 games. He finished with a plus-minus rating of +36 and was the finalist as the best defensive forward.

Matthew’s professional ice hockey began when he was drafted by the Toronto Maple Leafs at the 2002 NHL Entry Draft, in the second round of selection, the 57th overall.

In 2003, Stajan was assigned to the American Hockey League, the AHL’s St. John’s Maple Leafs at the conclusion of Belleville’s season.

On 2003 April 4th, the very next day after his re-assignment, he debuted his NHL against Ottawa Senators. He scored his first goal on goaltender Martin Prusek in a 3-1 loss.

In the years 2003-2004, he earned a spot on the Toronto roster. In this rookie season, he appeared in 69 games, scored 14 goals, and recorded 27 points; he appeared in three playoff games and also played in the YoungStars Game for the 2004 All-Star Game.

In the interval when the 2004-05 seasons were canceled, Stajan recorded 66 points with St. John’s in 80 games scoring 23 goals.

In 2004, Matt debuted for the NHL as a member of the Maple Leafs after a contract for a new two-year term ahead of the 2006-07 seasons.

Although he was an unrestricted free agent, Matt decided to remain in Calgary.

This season was somewhat the worst in ‘franchise history’. To top it, season 2011-2012 took a toll on his fitness because of a sprained ankle, and missed 14 games.

After his previous coach Brent Sutter left, the new coach Bob Hartley expanded Stajan’s responsibilities. Stajan responded to Coach Bob’s leadership by scoring one of his best seasons- 23 points in 43 games. This also earned him praise for his defensive skills. However, Matt again suffered a leg contusion, followed by a knee injury after colliding with Montreal’s Jarred Tinordi.

He finished the year with 16 points in 27 games with Calgary which resulted in a combined total and career-high of 57 points.

In 2014-15, Stajan made up for what he lost for the first time since 2008-09. He played every game in the postseason and formed the Flames’ most dangerous forward line along with wingers David Jones and Micheal Ferland. Stajan finished the playoffs with  1 goal and 4 points in 11 games against the Vancouver Canucks.

In total, Matthew Stahan played a total of fifteen seasons with the NHL.

In 2018, August 29th, he signed up with EHC Red Bull München of the Deutsche Eishockey Liga, the DEL. This would also be his last season.

Stajan was instrumental in steering EHC Red Bull Münich in the finals of the Champions Hockey League and one of the best seasons for him. Stajan recorded 33 points in 52 games for the EHC.

You may want to read about his official retirement-

Anytime you get the NHL’s silver stick, that’s a big milestone and you should be commended on one heck of a career.

Back in the summer when he was still mulling over his options, I sat down with him to hear all about what ended up being his final season in Germany.

Here’s that story again, in case you missed it.

He and his family had a great time in Europe as his farewell tour.

In 2018, August 29th, he signed up with EHC Red Bull München of the Deutsche Eishockey Liga, the DEL.

This would also be his last season.”

The five teams Stajan played with are-

In 2003, Matt Stajan along with the Canadian National Junior Team won a Silver Medal at the World Junior Hockey Championships.

In 2007, he was the Toronto Maple Leaf’s nominee for the King Clancy Memorial Trophy

In 2012, Matt became the Member of the All-Star Team in the Canadian Hockey League’s All-Star Series.

In 2013, Bundy was awarded the Ralph T. Scurfied Humanitarian Award for perseverance, dedication, and leadership.

A supporter of Ronald McDonald House including pumpkin carving at Halloween, cooking nights for the families, and even filling the magic room at the house with toys for children who get to pick a toy after receiving either good or bad news.

And in 2014-15 following the death of his first child, Mr. and Mrs. Stajan raised over $100,000 for the neonatal intensive care unit at Calgary’s Foothills Medical Centre. The event was “A Night Under the Stars”.

Stajan has auburn hair and blue eyes. He is 6 ft 1 in height and weighs 88kg.

Of Note, Matthew Stajan is listed among the top-sixteen richest ice-hockey players and is considered to be one of the highest-paid NHL players among which are Jonathan Toews, Sidney Crosby, and Patrick Kane.

You may also want to read about the life and married and single status of Patrice Bergeron and Jenny Tift.