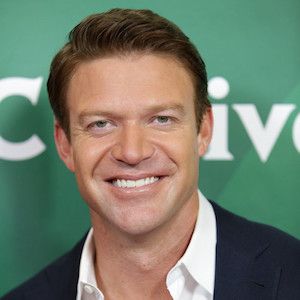 We're used to boy meets girl, boy likes girl, instant attraction on TV. But you throw a son in there, you throw a marriage in there, and you've got some really good character stuff

The Glades' is a light cop procedural about a cop from Chicago who got shot in the bum by his captain and made a change down to Florida, so he's a bit of a fish out of water

It doesn't matter how much I think I know about Florida, it still flips me on the head every time. It's just an absurd, eclectic place, and the stories that can come out of that place just never stop.

What is the relationship of Matthew Passmore?

Matthew Passmore got married to beautiful lady Jacqui Passmore in 1997. They were together in this married life for 8 years. The actual reason for their divorce is still unknown.

After their divorce, Matt was spotted with Natalia Cigliuti. They had a romantic love affair before they got married. After dating her girlfriend they married on 3rd January 2016.

Who is Matthew Passmore?

Matthew Passmore is a well-known Australian TV actor and an activist for animal rights. He was born in Queensland Australia.

Matt Passmore is known for his acting in McLeod’s Daughter as Marcus and Blue Heelers as a trauma-suffering husband. He began his career as an actor in the children’s show Play School after which he did many Australian TV shows.

Born in Wynnum-Manly Queensland, Australia on December 24th, 1973. His nationality is Australian and his ethnicity is also Australian.

Matt’s full name is Matthew Passmore. He was a very creative person since his childhood. Because his father was a successful entrepreneur he encouraged him to join the family business.

Due to his low interest in that segment, he dragged himself to the entertainment industry. He was encouraged by his teachers to join an acting institution after his school.

He is very fond of music and whenever he gets free time he spends it listening to music.

He passed graduation from Australian National Drama School. After which he started his career as an actor.

Matthew Passmore is a very struggling person, at the start, he was an army person after that he worked as a factory worker. Then he started his career in the entertainment industry with a children’s show Play School in the year 2002. He gained his pace and played as Pete in Always Greener.

In the same year, he also worked as Brad in The Handicapped and Blue Heeler as a Trauma Patient. His career took heights when he worked for McLeod’s Daughter from 2006 to 2009.

In between, he also got a chance to play the lead role in the Australian short movie Noir Drive.

He worked as a private detective. He also worked in movies like Son of the Mask in 2005 and Come Back to Me in 2014.

He was more famous on the TV screen. He worked in the series The Glades. Matt is always busy with his career focusing on his work. He also works as an activist. He always focuses on animal rights and their protection.

Matthew has a height of 6 feet 2 inches, His body weighs 72kg. He has brown hair and light brown eyes.