Matthew Rhys is a Welsh actor. He is known for playing Kevin Walker in Brothers & Sisters and Philip Jennings in The Americans. 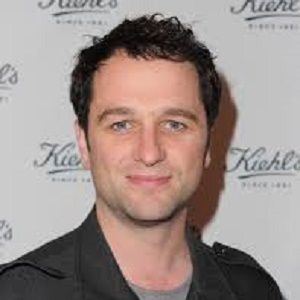 In my head, I think I'd make a perfect spy, but in reality, I don't think I'd fare very well.

I thought maybe I'd be a farmer. That was another silly notion. I think I'd last about five minutes, being a farmer.

I call Sally Field 'America's Mother!' She is incredible to watch.

Since 2014, Matthew Rhys is in a relationship with his girlfriend and The Americans co-star, Keri Russell. The couple had one child (Sam). Their son was born in late May 2016.

Furthermore, the couple is living a happy and wealthy life till now.

Who is Matthew Rhys?

He has starred as Kevin Walker on the ABC television drama Brothers & Sisters, and as Dylan Thomas in The Edge of Love.

He was born on  8 November 1974 as Matthew Rhys Evans in Cardiff, Wales, UK. His ancestry is Welsh.

Matthew is the son of Glyn (father), a headmaster, and Helen Evans (mother), a teacher. He has an older sister Rachel, a BBC broadcast journalist.

Matthew grew up in Cardiff. His childhood celebrity crush was Audrey Hepburn.

An actor attended Welsh-medium schools. He applied to and got accepted at the Royal Academy of Dramatic Art in London at age 17.

Rhys went to New Zealand to star in Greenstone, a colonial costume drama for television in January 1998. After that, he landed a role in Titus, Julie Taymor’s adaptation of Titus Andronicus. As well, he played the lead role in Metropolis, a drama series for Granada TV in 2000, about the lives of six twenty-somethings living in London.

A popular actor traveled to Ireland to star in the 18th-century swashbuckling adventure, The Abduction Club. He played Justin Price, the murderer in the final episode of the long-running television series Column in 2003.

Rhys appeared in a BBC Two two-part drama adaptation of Charles Dickens’s last novel, The Mystery of Edwin Drood,  in January 2012, left unfinished at his death in 1870. Rhys was scheduled to reprise Sir Alec Guinness’s 1959 double role of John Barratt/Jacques DeGué in a new adaptation of The Scapegoat in 2012.

Moreover, he took to the stage with the National Youth Orchestra of Wales as part of the National Eisteddfod in August 2009.

He has received awards for the role of Philip Jennings on the FX drama series The Americans. He was honored by Aberystwyth University as a Fellow on 15 July 2008.

Besides, he was honored at the Welsh National Eisteddfod by being accepted as a member of the druidic order of the Gorsedd of the Bards, for his contributions to the Welsh language and Wales on 8 August 2008.

Once he became part of controversy due to the “Burnt” scene. But at present, this actor is not surrounded by any desperate rumors.

Matthew Rhys: Salary and Net Worth

He earns a decent amount of money but has been hiding the information from the media.

His estimated net worth is about $2 million. But along with his wife, Keri, he shares a net worth of $10 million.

Matthew Rhys has an average body with black hair and brown eyes. Furthermore, he is 5 feet 11 inches tall with a body mass of 76 kg.

Luke Macfarlane, on being gay, his relationship with Wentworth Miller… is a pretty exciting one. Wanna Know About It???