Actor Matthew Settle is a father of two.

Matthew Settle was a married man as he married Naama Nativ previously. In July 2006, he eloped with the actress and model Naama for marriage. They had a daughter, Aven together who was born in 2009. But the couple divorced on 10th May 2011.

Similarly, he has a daughter Nalu with his longtime girlfriend Maria Alfonsin. 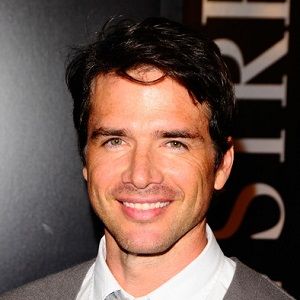 Women are to be loved, not understood.

Who is Matthew Settle?

Jeffrey Matthew Settle known as Matthew Settle is an American actor. Likewise, he played Captain Ronald Speirs on the HBO miniseries Band of Brothers and Rufus Humphrey on the CW teen drama series Gossip Girl. Similarly, He played John in the 2006 movie, “The Celestine Prophecy”.

He was born on 17th September 1969 in Hickory, North Carolina, the U.S. He is the son of Robert Settle and Joan Settle. Similarly, he is the youngest of six children, having two sisters and three brothers. His father is a Baptist minister.

His nationality is American and his ethnicity is English and Scottish.

He made his Broadway career debut in a strictly limited engagement in Chicago: The Musical, appearing as Billy Flynn from April 19 through June 13, 2010. Similarly, he made his feature film debut in I Still Know What You Did Last Summer co-starring alongside Jennifer Love Hewitt, Freddie Prinze Jr., Mekhi Phifer, and Brandy Norwood.

Similarly, Matthew Settle also had a guest appearance in the seventh season of Law & Order: Special Victims Unit as a reporter in the episode “Storm”. From the year 2007 to 2012, he portrayed Rufus Humphrey, the father of Dan and Jenny, on the CW teen drama series Gossip Girl.

Likewise, his other roles include his portrayal of Captain Ronald Speirs in the HBO miniseries Band of Brothers, and also his role as Jacob Wheeler in the TNT miniseries Into the West. Further, he also played the part of John in the film Beneath. Later, he played John in the 2006 movie, “The Celestine Prophecy”.

He was nominated for Teen Choice Awards for Choice TV Parental Unit Gossip Girl and Film Choice Sleazebag for I Still Know What You Did Last Summer. Similarly, he won Western Heritage Awards for Television Feature Film, Into the West.

The estimated net worth of Matthew is around $4 million. He might earn a huge amount of money from his career. But he has not revealed his salary and incomes.

Talking about Matthew Settle’s body measurements, he has a height of 5 feet 10 inches and his weight is 75kg. He has dark brown hair and hazel color eyes.