The Dutch professional footballer Matthijs de Ligt plays as a defender for Ajax. he is in a relationship with his girlfriend Annick Diekman. 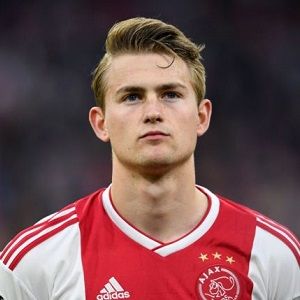 What is the relationship of Matthijs de Ligt?

Matthijs de Ligt is too young to get married. But he is in a relationship with his girlfriend Annick Diekman. She is a hockey girl playing for HC Athena a club in Amsterdam. Similarly, their affair came to light in mid-2014.

They have been together for a long time but have no plan for marrying yet. He is often seen posting snaps with his girlfriend on Instagram in different places. They are often seen enjoying their holidays in public places, hills, and beach, etc.

Who is Matthijs de Ligt?

The Dutch professional footballer Matthijs de Ligt plays as a defender for Ajax. Similarly, he also plays for the Netherlands as a Central defender. He is known as the youngest Dutch player to score in the knockout stages since 1996.

Likewise, he became the youngest player ever to play in a major European final when he started against Manchester United in the 2017 UEFA Europa League Final.

He was born on 12th August 1999 in Leiderdorp, Netherlands. Similarly, he is the son of Frank de Ligt and Vivian de Ligt. He also has twin siblings Fleur and Wouter.

Likewise, his nationality is Dutch and his ethnicity is unknown.

Talking about her education, he has not revealed about the school he attended. There is no information about his education.

He began his football career at the age of nine by joining Jong Ajax. After being promoted from the youth club of Ajax, he started playing in a senior team since the year 2016. He made his debut match against FC Emmen on August 8, 2016. Similarly, he scored a goal over Willem II F.C on September 21 and became the second youngest goalscorer behind Clarence Seedorf.

Similarly, he also plays for Ajax since 2016 and extended his contract with Ajax until 2021. Till now, he has scored 4 goals in 23 appearances for the team. Likewise, he was also the key player of the team that secured second place in the UEFA Europa League (2016-17).

Likewise, he was in the eye of Spanish top club Barcelona to sign after the injury of Samuel Umtiti. Moreover, there were rumors that he is set for €45 million in January Switch to Barcelona. He represented his team Netherlands in U-15, U-16, U-17, and U-19.  Similarly, after two years in the youth team of the Netherlands, he made his senior debut for the national team in 2017 against Bulgaria.

On 17th December 2018, he won the Golden Boy Award becoming the first defender to win the award. Similarly, he has been honored with the Best player of ABN AMRO Future Cup in 2015 and Best Player of Copa Amsterdam in 2015.

Likewise, he has won Eredivisie Team of the Year and Dutch Footballer of the Year.

He has an estimated net worth of €1 million as of 2022. He earns a huge amount of money from his football career. Similarly, he receives €12k weekly and €624k annual salary from his recent club. Likewise, he has a market value of €65 Million.

Moreover, Manchester United has launched a £70million bid for him.

Manchester United moved in when Barcelona refused to pay the Dutchman’s agent £12million to broker a move to the Nou Camp after De Ligt led his Amsterdam club to a league and cup double.

Talking about the body measurements of Matthijs de Ligt, he has a decent height of 6 feet 2 inches and his weight is 70 kg. His hair color is blonde and he has blue color eyes.