Mattia Perin is married to his wife Giorgia Miatto. The couple dated since 2013 and finally married on the 29th of December, 2019.

The two also have a daughter named Vittoria who was born on the 19th of February, 2018. Aside from this, Perin has kept his love life quite private. Due to this, nothing is known about his past relationships as well. 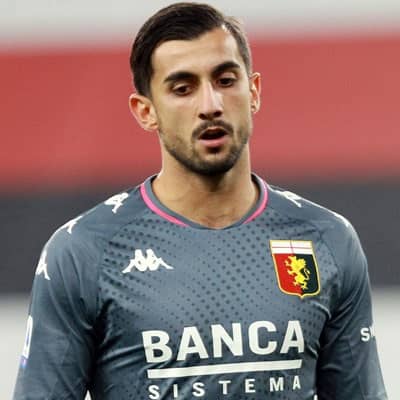 Who is Mattia Perin?

Mattia Perin is a popular Italian football player. He is a great goalkeeper currently playing for Serie A club Genoa on loan from Juventus.

Perin is also part of the Italy national team in the ongoing UEFA Euro 2020.

Mattia Perin was born on the 10th of November, 1992 in Latina, Italy. As of now, his age is 28. His nationality is Italian and his ethnicity is also Italian.

Talking about his parents, Perin’s father’s name is Pierluigi Perin and his mother’s name is Annamaria Perin. He grew up playing football in his hometown in Italy. Mattia doesn’t have any siblings as he is the only child of his parents. He has not shared much else about his childhood aside from the fact that he was chosen to be a part of Genoa’s youth system.

Mattia hasn’t revealed anything regarding his education. He seems to be well educated but his exact qualifications are not known.

Perin moved up to the first squad of Genoa in January of 2010. He was mostly on the bench though and only started in 2011 in a match against Cesena. He was later loaned to Serie B club Padova in the 2011-12 season.

He even won the league with Juventus but only played a handful of games as he was the backup goalkeeper. Eventually, he rejoined Genoa on loan in 2020 and is going to be playing for them until the end of the 2020-21 season.

Mattia Perin played as the first choice keeper for the U-17 Italian national team. The goalkeeper has also played in a number of games as part of Italy’s U-19 and U-21 squad as well.

Mattia Perin involved himself in a major controversy in Italy after exchanging insults with a fan from rival club Frosinone. In 2016, Mattia insulted a fa of the club on Instagram by saying “your grandfather speaks Arabic”, referring to the Marocchinate atrocities in 1944. A lot of people, including Italian senator Maria Spilabotte condemned his insult and it gave Perin a negative image for quite a while.

Mattia stands at a height of 6 feet 2 inches tall and his weight is roughly 77 kilograms. He has built an attractive and athletic physique as well. His hair and eyes are both dark brown in color.

Get to know more about the lives of Roberto Soriano and Giovanni Di Lorenzo as well.