Matty Cardarople has been married to his girlfriend turned wife, Lauren Cardarople. His wife is beautiful and adorable. They have known each other for many years. They got engaged in March 2016 and finally married on January 29, 2017. Matty maintains the privacy of his wife.

They do not have a child yet. As for now they are enjoying their company and have no news of any divorce, breakup, or split up. 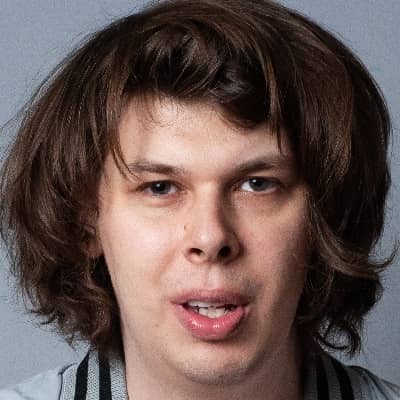 Matty Cardarople is an American Actor and Comedian who is popular for his role in Lemony Snicket’s A Series of Unfortunate Events, Jurassic World, and Stranger Things. Recently, he was seen in the science fiction action comedy movie, Free Guy and Tv Series, Reservation Dogs.

Matty Cardarople born Matthew Richard Cardarople was born on February 9, 1983, in Exeter, New Hampshire, USA. As of now, he has aged 38 years.

The name of his parents is not mentioned yet and they divorced when he was young. He always wanted to be an entertainer since he was young. Likewise, he is an avid animal lover and also spends his days drawing and writing poetry.

Matty is an American by nationality and Aquarius by zodiac sign. He has been the brighter kid at New York Film Academy and further pursues his acting studies at The Beverly Hills Playhouse along with Lesly Kahn.

Matty Cardarople has been talented since his childhood and started his career at the age of 22 in the movies and TV series. His first acting role came in 2007 as Mailroom Worker in a TV film called Blonde Ambition and was later seen in varieties of roles in Drillbit Taylor, Absolute Evil – Final Exit, Scrubs, Gayle, The Three Stooges, Comedy Bang! Bang!, Royals the Series, and Chasing Life. However, he was well known as Charlie in Selfie in 2014.

Besides acting on TV he has featured in many films and the most notables include Jurassic World, The Big Sick, Please Stand By, I Am Woman, and Wheels of Fortune among the others. Furthermore, his tv series, A Series of Unfortunate Events, Archibald’s Next Big Thing, and Reservation Dogs is a must-watch!

Cardarople has yet to clinch awards and nominations.

Of all his illustrious career, why has he not earned an estimated net worth of over $5M? Many sources claim he has accumulated around 5 million.

Matty does his job without harming others and has a clean and safe profile.

Talking about his appearance, he stands at a height of 6 feet 4 inches with a moderate weight. Similarly, he has blue color eyes and dark brown hair. Further, there is no detail about his body stats.