Matthew Healy is an English singer who is best known as the lead singer of the pop-rock band The 1975 and is known for the song Love It If We Made It. He is currently single.

The musician is rumored to have hooked up with Halsey(Ashley Frangipane) in 2013. Further in 2014, he was rumored to be dating Aliana Lohan and Gabby Brooks.

Before it, he was in a long-term relationship with model Gemma Janes. The couple, however, broke up in 2014.

Mattew was also in a relationship with Gabriella Brooks from 2015 to 2019.

Just in February 2020, he has different rumors to be dating singer FKA twigs and Matt Healy. 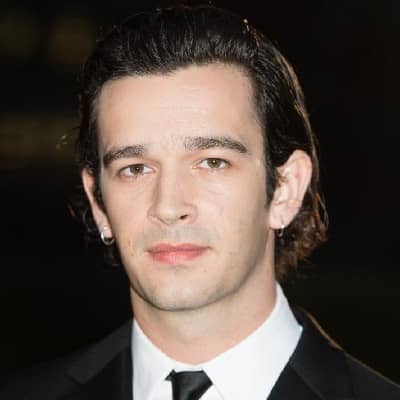 Life’s too short to drink crappy coffee and cry over boys who don’t care.

Everything that we’ve ever done has led up to this moment, so I presume there’s a certain intricacy in that.

There’s a lot that’s happened in my life that maybe I didn’t want to happen, but I suppose it’s led me to exactly where I am now.

Who is Matty Healy?

Matthew Healy is an English singer who is best known as the lead singer of the pop-rock band The 1975 and is known for the song Love It If We Made It.

Matty was born on the 8th of April 1989, in London, England, United Kingdom. His birth name is Matthew Healy. Additionally, he grew up in Newcastle and Cheshire.

He holds British nationality and is of Irish ethnicity.

Matty Healy has built his career in the music field and is now one of the popular names in the music industry. He is the main songwriter of his group, “The 1975”.

Firstly, they performed under the names “Me and You Versus Them”, “Drive Like I Do”, “TALKHOUSE!” and “The Big Sleep”. Finally, they concluded with the name “The 1975“, under their manager Jamie Oborne.

He has produced songs like “Robbers” and “Somebody Else”. Matty has visited different countries like Europe and the USA for his music tours. Mainly, he performs in the Robert Hall of London.

He joined The 1975 band in 2002 and is since playing together. They used to rehearse at Matthew’s parents’ house. Before he used to play the drums but after their main singer left the band, he took over as the lead vocalist.

Matthew along with Ross MacDonald, Adam Hann, and George Daniel started playing punk-rock and pop covers. Then after they started writing their music at the age of about 15 in 2004.

Their first EP (extended play record) “Facedown”, was released in 2012. It was aired on national radio, with the lead single, “The City”. The song became a hit on BBC Radio 1.

Following it, their second EP, “Sex”, was released in the same year followed by the single “Chocolate” which reached number 19 on the UK Singles Chart.

In the year 2013, they released their self-titled debut album which reached number one on the UK Albums Chart. The band also has an international tour of Ireland and the USA promoting their album.

Moreover, the band receives an invitation to play with the “Rolling Stones” in Hyde Park in July 2013. They performed on stage at the 2013 Reading and Leeds Festival also.

Their second and third albums “I Like It When You Sleep, For You Are So Beautiful Yet So Unaware Of It” and “Music for Cars” followed with renewed success. In the year 2016, the band came out with their hit single “The Sound” which was released as a music video in digital format.

Matthew made his first TV show appearance on Live & Kicking as himself in 1999.

In 2016, Matty received  The Best Album awards in The UK”s annual music “Q” Awards for his album, ‘I Like It When You Sleep, For You Are So Beautiful Yet So Unaware’. The same year, he received, the Radio 1 Live Lounge Performance of the Year award by BBC for his album, What Makes You Beautiful.

Likely, in 2017, his band won Best Live Band in NME Awards, and also Best British Group in Brit Awards. Furthermore, Healy was also “Ally of the year “at the 2019 Diva Awards.

Other information regarding his earnings is not available. And, he has not done endorsement work for any brand yet.

In 2014, he was rumored to be dating Aliana Lohan and Ashley Frangipane 2013. Apart from it, he hasn’t received any sort of controversy until now.

Moreover, his band has its own YouTube channel titled by the band’s name, 1975 which has around 2.65M subscribers.

Matthew Healy
Tags : English singer Love It If We Made It The 1975