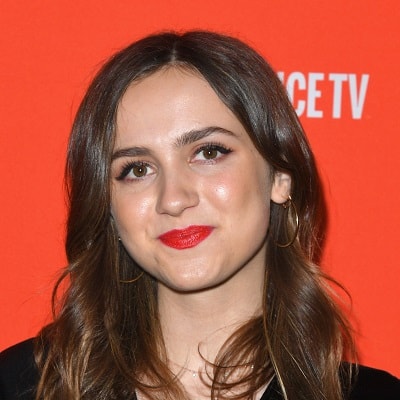 Maude Apatow is currently in a relationship. She is dating her boyfriend Charlie Christie since May 8, 2018. They share quality time with each other and enjoy their love life with deep courage and madness.

She wished her boyfriend on June 24, 2018, with the occasion of his birthday with a beautiful caption.

Who is Maude Apatow?

She was born on December 15, 1997, in Los Banos, California, USA. Maude is currently 21 years old. She was born to father Judd Apatow and mother Leslie Mann. Her mother is an actress and her father is a director. She has a younger sister named Iris Apatow.

Maude holds American citizenship but her ethnicity is a mix of Irish, Finnish, Scottish, German and Ashkenazi Jewish.

She attended Crossroads School and then joined Northwestern University from which she graduated.

In 2017, she debuted from the comedy film ‘Knocked Up’ which was written, directed and co-produced by her father Judd. She portrayed the role of Sadie, who was a daughter of her mother’s on-screen character Debbie.

She played a minor role in the American TV series ‘Girls’ in 2015 which was aired on HBO. In addition, she portrayed a supporting role in the 2017 movie ‘The House of Tomorrow’. In 2018, she portrayed the role of Grace in ‘Assassination Nation’ in 2018.

She was nominated for Young Artist Award in the category Best Performance in a Feature Film- Supporting Young Actress for ‘This Is 40’ in 2013.

Maude has been successful in keeping herself far from rumors and controversies in her personal and professional life.