Tall and handsome Maurice Harkless is a basketball player. 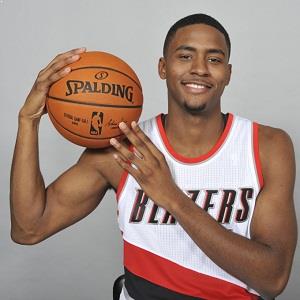 Reflecting on the personal life of Maurice Harkless, previously he was in a relationship with Paige Hurd.

They started being in a romantic relationship in the year 2013 but their relationship couldn’t last for long.

Talking about a present relationship with him, he is possibly single. His personal life isn’t in the limelight as his career path is.

There isn’t any solid proof that leads towards his married lifestyle and children.

Being a celebrity, his personal stuff is always a matter of discussion and interest to the public. Due to the lack of much information about him, his fans are always curious to know more about him.

Who is Maurice Harkless?

He is best known as a player from Portland Trail Blazers wearing a jersey number 4. He plays from the small forward position.

Professional basketball player Maurice Harkless was born in New York City, New York. He was born on 11 May 1993 and named as Maurice Jose Harkless.

His grandfather hails from Puerto Rico. His mother’s name is Rosa Harkless. Harkless started playing basketball since his high school.

For his further study, he attended St. John’s College where he has won the Big East Rookie of the Year Award.

Talking about career journey of Maurice Harkless, he has been active in the professional basketball game since 2012 and he is still engaged in it.

He started playing basketball professionally after being selected by Philadelphia 76ers in the 2012 NBA draft but soon he was traded to Orlando Magic.

On 10 August 2012, he joined the Magic and started playing from there.

On 14 July 2015, he was traded to Portland Trail Blazers in exchange for 2020 second round draft pick. On his debut match from the Blazers, he recorded 8 points and 4 rebounds winning against New Orleans Pelicans.

On 5 April, he recorded the season-high 20 points and career-high 16 rebounds in a winning match against Sacramento Kings.

Since July 2015, he has been playing for the Blazers and he is still playing from the same team.

Maurice Harkless: Salary and Net Worth

His salary is 8.989 million USD but his net worth is unknown.

He suffered a controversy when he said, ‘If the camera was off, I’d tell you why Blazers are losing.’ Additionally, currently, there are no rumors concerning him and his career.


Maurice has a height of 6 feet 7 inches and weighs 95 kg. His hair color is black and eye color is also black. His shoe size is unknown.