Previously, Mauricio was romantically linked to a popular Venezuelan actress, Kimberly Dos Ramos who is known for her roles in El Rostro de la Venganza, La Desalmada, and ¿Quien es Quien?. The ex-couple dated in 2012 but sadly they separated after a short time in 2013. 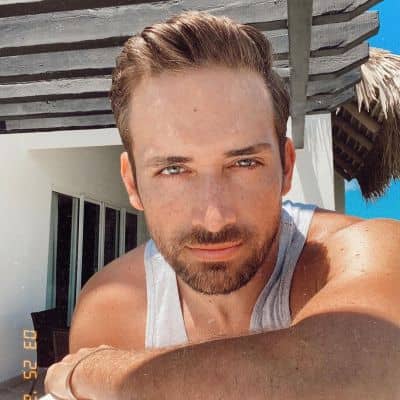 Who is Mauricio Henao?

Mauricio Henao is a well-recognized Colombian actor and television personality. Henao is widely famed for his performance in telenovelas for Telemundo.

Moreover, he is also known for his work in the Kids Choice Awards-nominated portrayal of Tony Gordillo on the Nickelodeon Latin American series, Grachi.

Mauricio Henao was born on 16 February 1987. At present, he is 34 years young star. Likewise, his birthplace is Armenia, Quindio, Colombia.

Mauricio has been secretive towards his family details. Moreover, he has not shared his sibling’s information in the public yet.

Talking about his nationality, Henao holds a Colombian identity whereas his ethnicity is Colombians.

Regarding education, the actor might be well-educated. He studied at Cypress Creek High School.

Moreover, Henao earned the lead role of Tony that made him nationally and internationally recognized in the Nickelodeon teen drama series, Grachi. He then came up with the opportunity to work for another Telemundo telenovela entitled Mi Corazon insisted en Lola Volcan.

The star then earned his first prime role in the MTV teen drama series, Ultimo ano where he featured with Dulce Maria in 2012. He then performed in the last chapters of the Televisa telenovela, La Tempestad in 2013. The star also joined the cast of the series, Senora Acero performing the role of Jose Angel Godoy, Michel Duval’s best friend in the series.

A famed star, Henao has earned a handsome amount of money from his profession. He has been active in his profession from the year 2010 till the present.

It is reported that Mauricio Henao has an estimated net worth of $1 million. He has modeled for different brands such as Nicolas Felizola, Tommy Hilfiger, Calvin Klein, Paul Joe Paris, and so on.

Mauricio has never been part of any controversial matter or rumors till now. The star has been preoccupied with his professional and private life.

It seems that Henao prefers enjoying his personal life and does not want to merge it with his professional life.

34 years young star, Mauricio has handsome looks and an admirable personality. He stands at a height of 5feet 9inches. Also, he has a balanced body weight of 75 kg.

Furthermore, Henao has green eyes whereas his hair is blonde.

Regarding his social media presence, Mauricio Henao is an active personality on social media. Mauricio has more than 753k followers on his official Instagram account @mauriciohenao_.

He is also active on Twitter with around 170.8k followers.

Moreover, Henao is also available on Facebook with nearly 1 million fans and supporters.