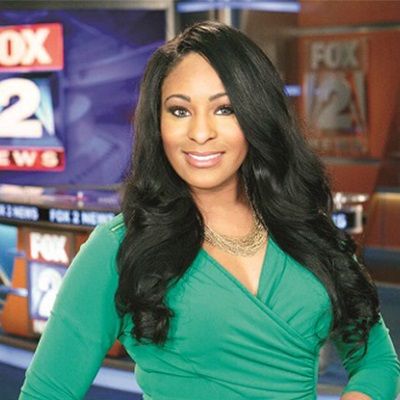 The American Journalist Maurielle is not married. At present, she is enjoying her single life as well. When it comes to love life and relationship she has always been secretive. But she is seen on Facebook back in 2016 asking some dating questions to her followers.

She was curious to know whether honesty is important at the risk of hurting feelings or not. All those things relate that she is dating someone. But she has not confirmed anything and has not opened up about it.

Maurielle Lue is an American Journalist who works as a television host and news anchor for FOX 2 Network. She is the host of shows like The Nine and Let it Rip Weekend.

Similarly, Maurielle is an Emmy Award winner for her work as a reporter for the news piece “Mamma Said He Deserved to Die”.

She was born on 25th March 1985 in Antonio, Texas. She was born to father Marcel Lue and mother Heidi Lue. Likewise, she respects and loves her parents as she keeps posting and wishing them on different occasions. It seems like she is grateful for her parents. She spent her childhood with her brother Myles who is younger than her.

Maurielle belongs to American nationality. Now moving towards her education, she attended Scripps Howard School of Journalism for her high school education. She completed high school with honors.

After that, she educated from Hampton University. She earned a Bachelor’s degree in communications and graduated in the year 2006. Her interest in Journalism was from an early age which led her to pursue a career in Journalism.

The daddy’s girl Maurielle revealed that her father was the one with whom she used to stay up late and watch the news. Eventually, all these things became a daily habit and due to all this, she was more fascinated with journalism.

After graduation, she started working with WVVA. It is a station affiliated with NBC based in West Virginia. She was a reporter at WVVA during the week and she anchored, produced and reported her own newscast during the weekends.

In the year 2008, she left WVVA and joined WEWS-TV which is a Cleveland-based TV station affiliated with ABC. Similarly, she was a lead reporter for the “Cleveland Strangler” story. There she was a General Assignment Reporter, Breaking News Reporter, Traffic Reporter, and Morning Anchor for three years.

Later she moved to Detroit to join WJBK in the year 2011 and had worked there for around 5 years. Her other work includes that she has been a speaker at the Cleveland High School’s “Girl Future Leaders” event in the year 2008.

In the year 2011, she joined the local American dance competition TV series “Dancing With the Stars Cleveland”. She secured first place in the competition. Also, she is a member of the Alpha Kappa Alpha sorority & National Association of Black Journalists.

The estimated net worth of the FOX News host is $1 million. The annual salary of Maurielle is around $70,000 from her successful reporting career with FOX 2 Network. Fox News Reporters earn from $68,968 to $77,304.

Interest and likes of Maurielle

Maurielle is a shopaholic and likes dressing up. Some of her favorite places for shopping are Pink Pump, Dawood Boutique, Blu Jeans Blues and Royal Dutches. For her fashion inspiration, she checks out the new Instagram trends and owns it. In one interview, she revealed that her style icon is Michelle Obama.

In the business world, her inspiration is Oprah Winfrey. She is a diet conscious person and has maintained her figure. But some of her best local place to grab a bite to eat is “Las Cazuelas” for fish tacos and “ShoGun Hibachi Grill” for her cheat days. She is not into coffee but she likes drinking Caramel Apple Spice from Starbucks.

Further, she is a very disciplined person who likes to follow the rule of going to bed at 9:30 pm, waking up at 2:30 am and starting her workday at 3:30 am every day.

She has black color hair and her eyes color is brown. Similarly, she has a curved body and she looks gorgeous.