Mauro Icardi is an Argentinean professional football player. He is married and a father of two kids.

Mauro Icardi began dating Wanda Nara in 2014, who at the time was married to Mauro’s former teammate Maxi Lopez.

After Maxi found out about Wanda’s relationship with Icardi, they split up and divorced. Shortly after Icardi’s and Wanda’s wedding which took place in a small ceremony in Buenos Aires on May 27, 2014.

In March 2018, as per Italian press reports, Wanda had cheated on Mauro with another teammate, Marcelo Brozovic. 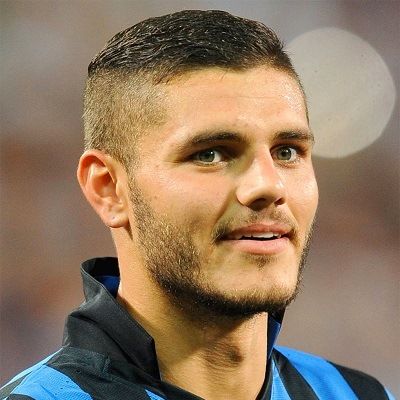 If Inter decides to sell me, I'll pack my bags and go. If not, I'll stay here in Milan where I am honestly very happy.

Regarding my pay, my salary, that I don't 'earn a lot,' these are things that are a result of two years ago when I came to Inter. To me, it was a good contract for having arrived at Inter. I signed the contract with the excitement and desire to prove my worth and be an important player for Inter.

The unhappy people are those who listen to others. I never listened to anyone, and I'm very happy.

Who is Mauro Icardi?

Mauro Icardi has been serving as the captain of ‘Internazionale’ since 2015.

Mauro Icardi was born in Rosario, Argentina, Italy on February 19, 1993. His birth name is  Mauro Emanuel Icardi and he is currently 27 years old.

His father’s name is  Juan Icardi and his mother’s name is Analia Rivero. He began playing soccer at the age of 5, in a juvenile team called ‘Sarratea.’

When he was 9 years old, his family migrated to Spain due to the recession and settled in the Canary Islands.

He has two siblings namely, Ivana Icardi and Guido Icardi. Mauro holds Italian- Argentine citizenship, but his ethnicity is unknown. His birth sign is Aquarius.

Talking about Mauro’s education history, there is no information about his educational achievements.

Talking about his profession, Mauro Icardi signed a contract with the Italian association football club ‘Unione Calcio Sampdoria,’ better known as ‘Sampdoria,’ on loan, till the end of the 2010–2011 season, a confirmation of which was made by the club on January 11, 2011.

He spent a six-month stint with the club’s ‘Primavera’ team, on loan, during which he scored 13 goals in 19 games.

He made his ‘Serie A’ debut on September 26, 2012, against ‘Roma.’ He netted his first goal in the professional league competition on November 12 that year, during the ‘Derby Della Lanterna,’ when ‘Sampdoria’ scored a 3–1 win over ‘Genoa.’

Icardi concluded the 2014–2015 season by becoming the top goal-scorer of ‘Serie A,’ along with Luca Toni of ‘Hellas Verona.’ Both Icardi and Toni scored 22 goals each and earned the ‘Capocannoniere’ title.

He was included in the ‘Serie A Team of the Year’ in the 2014–2015 season. As the season came to an end, ‘Internazionale’ signed a fresh four-year contract with him.

He became the captain of ‘Internazionale’ in 2015, and the club garnered a league victory over ‘Atalanta’ in his first match as a captain.  The contract included a €110 million buy-out clause.

The deal guaranteed to fetch him €4.5 million every season, along with several bonuses depending on his performances, goals scored, and image rights.

Besides that, he emerged as the most efficient striker in the top 5 leagues, outshining stalwarts such as Lionel Messi and Cristiano Ronaldo. His brilliant performance helped him reach the 49th position in the world ranking of ‘The Guardian,’ in 2016.

He scored his hat-trick within 14 minutes of the match, during the first half.

His senior international career with the Argentinean national football team began in 2013, and he made his first appearance for the main squad on October 15 that year in a ‘FIFA World Cup’ qualifier match against Uruguay.

Mauro Icardi has an estimated net worth of $90 million in 2022, including all of his properties and incomes. He is currently receiving an annual salary of $4.1 million from his present club.

He gts paid around £135,000 as a weekly wage. Apart from his earnings from football, he too has linked with endorsing brands like Nike, New Balance, and others.

There are no drastic rumors regarding Mauro’s personal and professional life.

It seems like he is doing the best job without harming others for which he hasn’t been a part of controversy yet.

Mauro Icardi has a height of  5 feet 11 inches. Additionally, he weighs is 75Kg.

Muro’s hair color is dark brown and his eye color is blue.