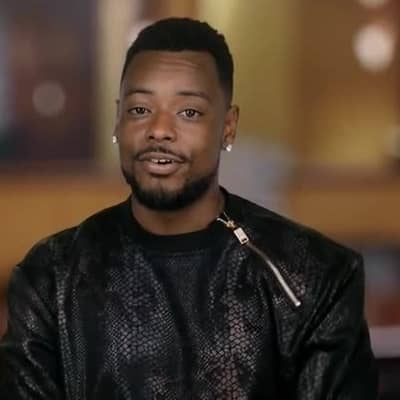 Max Lux’s current relationship status is married. He married his long-time dated girlfriend, Brandi Boyd who is an American TV personality and also best known for appearing in the hit reality TV show Love and Hip Hop. The couple also has children, a son named Prince Brandus and a daughter named Princess Cadence.

Who is Max Lux?

Max Lux is an American reality TV personality. He is known as a rapper, songwriter, and record producer. In the industry, he is known as a ghostwriter.

Max was born on July 22, 1989, in Los Angeles, California, United States of America. As of now, he is 31 years old. He holds an American nationality and he is of African-American ethnicity. His Zodiac sign is Cancer. Max’s real name is Max Boyd.

Max’s family background is not available and his childhood as well.

There is no information available regarding his educational background.

Max began his profession in the field of music where he starts composing tunes, writing songs. His writing skills are appreciable, which helped him to start his music career while collaborating with different artists.

Max starts his career with Lil Wayne who is also a rapper and songwriter. They released an alternate kind of music which helps them to achieve success.

Likewise, he collaborates with several high profiles artists, Ray J, Marques Houston, Diggy Simmons, etc. He releases several records include ‘How to Love’ which has been considered worldwide.

Max also appeared in the series, VH1 where his co-actor is his wife, Brandi Boyd. He gets more appreciation while he collaborates with his wife rather than his solo performance. He got more opportunities to work with different artists and also received more experiences.

Max has achieved several achievements in his entire career. He received a BMI award which is the biggest achievement of his career. He also honored with a similar award for the second time in his profession and helped to get noticed on social media.

Max Lux: Net Worth, and Income

According to the various resources, He earned an estimated amount of $5 million (approx.) through his profession in the field of music.

Recently, Max Lux’s wife, Brandi Boyd created a huge buzz on Instagram live when she alleged him for Domestic Violence against her. Her camera was off but she shared audio of threatening her and using verbal words by Max. Also, their children were crying in the background. Later, her wife denies that all alleged abuse were false.

Why are fans angry with Brandi Boyd? Know about her married life with Max Lux and few quick facts

11 most luxurious branded bags in 2021. These celebrities have used them