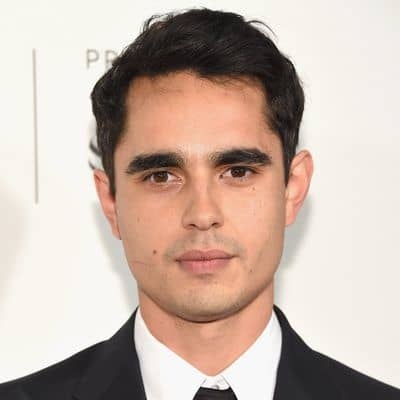 Who is Max Minghella Dating?

Currently, Max Minghella is dating, Elle Fanning an actress. They began their relationship after getting to know each other during the shoot of Teen Spirit in July 2018.

The rumors of their news were out after they were founding holding hands and on the date in London.

But, they officially revealed their relationship as a couple at the annual Met Gala in 2019. There is a 12-year age gap between Minghella and his girlfriend, Fanning.

Likewise, he was in a romantic relationship with Kate Mara, an actress. They started seeing each other in 2010 and ended their relationship in 2014.

He also dated Memphis Eve Sunny Day Hewson, known as Eve Hewson an Irish actress for appearing in ‘This Must Be the Place’ in early 2015. Their love relationship lasted until July 2015.

Who is Max Minghella?

Mix Minghella was born in Hampstead, London, England on 16 September 1985. Minghella is 36 years old as of 2022 and holds British nationality. His ethnicity is Mixed and according to the astrologers, Virgo is her birth zodiac sign.

He is the son of Carolyn Choa, a choreographer, of Chinese descent, and Anthony Minghella, a director, of Italian descent.

George Choa, his maternal grandfather was of Chinese and Jewish descent while Maisie Nora his maternal grandmother, was of English, Swedish, Chinese, Irish and Parsi ethnicity. Hannah Minghella is his half-sister who has appeared in several movies.

Likewise, he went to St Anthony’s Preparatory School and enrolled at University College School. In 2009. he graduated from Columbia University with a major in history.

While studying at University College School he withdrew from there and joined the National Youth Theatre.

Max Minghella started his early career by landing the extra role in the movie, Cold Mountain directed by his own father, Anthony Minghella.

He debuted in the American drama, Bee Season which was released in November 2005 and grossed around 1 million USD after its release.

In the same year, he portrayed the son of George Clooney’s CIA agent character in the Art School Confidential by Daniel Clowes.

Minghella was able to book his role in Hippi Hippie Shake by Beeban Kidron, a movie about writer Richard Neville set in 1960s London.

Since 2017, he has been portraying Nick Bline, an Eyein Gilead in the American dystopian television series titled, The Handmaid’s Tale that aired on Hulu.

In 2021, the role in the following series got him in a nomination of the Primetime Emmy Award for Outstanding Supporting Actor in a Drama Series.

Max Minghella debuted as a director and screenwriter through his musical drama movie titled, Teen Spirt in 2018. The world premiere of the movie was on September 7, 2018, at the Toronto International Film Festival.

As per Celebrity Net Worth, the net worth of Max Minghella is accumulated to be around 3Million USD. But, there is no detailed info about his salary and income.

Max Minghella is not involved in any serious rumors and controversies to date.

Max Minghella is 5 feet 10 inches tall weighing around 75 Kg. His body measurements including waist, chest, bicep, and hips size are not available yet.

Moving towards his physical appearance, with a fair complexion he has a pair of black eyes and hair of the same color.

There is an official Facebook page under his name,  Max Minghella which has garnered about 10.5 k followers.