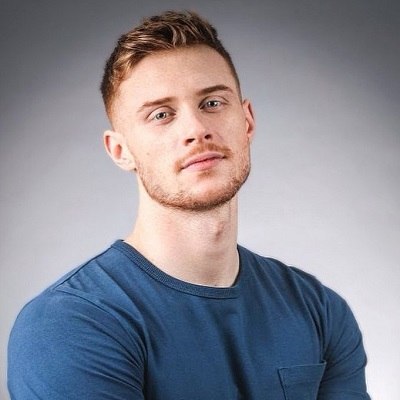 Max Parker’s current relationship status is possibly single. Till date, he has not introduced anybody as his lover or partner.

The two British actors first met at the set of Emmerdale in 2019. On-screen, they are portraying the characters of two siblings; Luke and Lee Posner. He often shares their pictures together including the sunbathing on the deck chair shirtless.

As of now, nobody has uttered anything in the public. Hence, things are not clear if they are dating in the real-life or just good friends.

Who is Max Parker?

British Max Parker is an actor and theatre artist. He is renowned as Alex of Love Sarah and Danny of World on Fire.

Last, in 2020, he featured the movie, Love Sarah. Currently, he is portraying the character of Luke Posner in the series, Emmerdale.

Parker was born in England. He is of British-Irish ethnicity with Jewish roots.

Till date, he has not shared any details on his birthdate, family background including his father, mother, and siblings.

Since childhood, Max Parker was in love with performing arts. At the time, he found himself inclined to the dance. Hence, he started learning various forms of dancing. Some of the dancing forms he has mastered include Ballet, Baritone, Contemporary, Hip Hop, and Tap.

Along with dancing, he found himself to be in love with theatre plays too. Later, he started exploring the sector too. As a result, he became part of the various theater plays. Some of his plays along with the theatre location and director of the plays are

He was even nominated for the BEST SUPPORTING PERFORMANCE at UK THEATRE AWARDS 2018 for his role of Tin Man in the play, THE WIZARD OF OZ.

After a successful career in theatre, he started exploring his career in the TV and movie sector too. In 2016, he made his movie debut with the film, My B.F.F as Christopher Morgan. Moving forward, in 2018, he portrayed the character of Alasdair ‘Base’ Newman in the series, Casualty.

In 2019, he joined the British soap, Emmerdale as Luke Posner. As of now, he has completed 39 episodes of the soap. Meanwhile, he also appeared in the TV series, Cobra and World on Fire and movie, Love Sarah.

Max Parker has blue eyes with a Titian hair color. He stands at a height of 6 feet 2 inches and a decent body mass.

Talking about his appearance, she has sharp looks with an oval-shaped facial structure. Also, he prefers to have slightly grown facial hair.

Till the date, he has not been through any sort of controversy and scandals that created a buzz in the media. Besides that, he has maintained a distance from any type of rumors too.

You may also read the bio of Connie Angland, Anna-Louise Plowman, and Brad Takei.

Know about Kait Parker Lifestyle! Is she Dating? Is She Married? Find out all including her personal life, Relationship staus, Career and many more!!