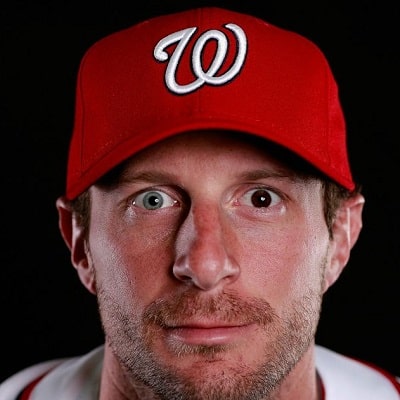 I'm aware of the luck in [BABIP], but at the same time, you can't directly influence it. You can just keep mixing your patterns, executing and locating, That's the human element of this game.

Social media is dangerous for baseball players. Things can get taken out of context so fast. You can say something you don't want to say. It's dangerous.

Max Scherzer is a married person. He has been married to Erica May since November 23, 2013. The pair met at the University of Missouri and started dating. Both were baseball pitchers there but May’s heart condition prevented her from playing.

The couple is blessed with a daughter Brooklyn May-Scherzer in November 2017. The family is currently living together and there are no rumors of divorce between the couple.

Who is Max Scherzer?

Max Scherzer is an American baseball player who is currently the pitcher for Washington Nationals of Major League Baseball (MLB).

He was born on July 17, 1984, in Chesterfield, Missouri, USA. He was born as Maxwell M. Scherzer and he is currently 34 years old. He was born to mother Jan Scherzer and father Brad Scherzer. He has a sibling- younger brother Alex Scherzer, who died by suicide in 2012.

Max holds American citizenship but his ethnicity is a mix of English and German.

He joined Parkway Central High School and then joined the University of Missouri.

Scherzer was a St. Louis Cardinals fan and also played baseball, football, and basketball in high school. He was even selected in the 2003 Major League Baseball (MLB) draft in the 43rd round (1,291st overall) by St. Louis Cardinals but he declined the offer in order to join the University of Missouri.

Then, Max Scherzer was chosen in the first round in 2006 and 11th overall in the 2006 MLB draft by Arizona Diamondbacks and played for the team until the 2009 season. Similarly, he was traded to Detroit Tigers on December 9, 2009, and played with them until 2014.

Moreover, he signed a 7 year, $210 million including $50 million signing bonus contract with Washington Nationals on January 21, 2015.

He has an estimated net worth of around $50 million and he has earned that sum of money from his professional career. Also, he earns around $22 million per year as a salary.

Max has been successful in keeping himself far from rumors and controversies in his personal and professional life.

Max Scherzer has a height of 6 ft. 3  inches and weighs 98 kg. His right eye is blue and his left eye is brown as he has heterochromia iridium. And his hair color is black.