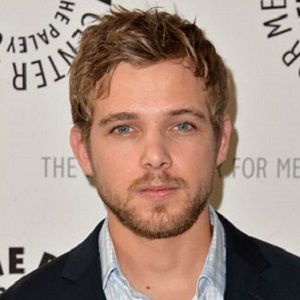 At first, I didn't like coming down to Los Angeles at all. It's like everything's black and white compared to where I live out in the middle of nowhere. There's like 400 people in my town!

[his hair for the movie The Pacifier (2005)] "They bleached it a ton of times for the movie, I'm surprised I still have hair left!"

I don't like going to dinner by myself, I'll call for delivery before I do that. It's awkward if you're at a table all alone. I'm sure nobody even notices, but there's something about it.

Max Thieriot has been married to his longtime girlfriend Lexi Murphy. They have been dating for seven years and finally tied the knot in June 2013. Since then they have been going well an further there is no news of divorce and split up. Furthermore, they are blessed with a son named  Beaux Thieriot in December 2015.

Who is Max Thieriot?

Max Thieriot was born on October 14, 1988, in  Los Altos Hills, California, US. His parents are Bridgit Ann (née Snyder) and George Cameron Thieriot. He was raised along with Frances “Frankie” Cameron, and one younger brother, Aidan. He is of an American nationality and of the mixed ethnicity of German, English, Irish, Norwegian and Dutch Jewish.

Talking about his education, he was enrolled at the Sonoma Country Day School and later graduated from El Molino High School in Forestville, California in 2006.

Before coming to the film industry, he used to do modeling and has done two short films. However, he began his big screen career from 2004’s adventure film ‘Catch That Kid’ which was followed by action comedy movie, The Pacifier in 2005. this film was breakthrough of his career as he was nominated for the Young Artist Award for Best Performance in a Feature Film – Supporting Young Actor.

In 2008, he got further attention when he played as Young David Rice in Jumper and as Will Shepherd in the  Kit Kittredge: An American Girl. For the latter role, he won the Young Artist award. After that, there is no turning back in his life and he went on to do many films and TV series Chloe, My Soul to Take, The Family Tree,  House at the End of the Street,  Bates Motel and among others Point Break.

Thieriot is estimated to have $2 million of net worth.

As he solely focused on his career and avoids any media rumors and tantrums. So, we can easily assume that he is far from controversy and rumors.

Max Thieriot stands 5 feet and 11 inches tall and weighs around 75 kg. He has blue eyes and light brown hair. Furthermore, he fits in 10 US shoe size.