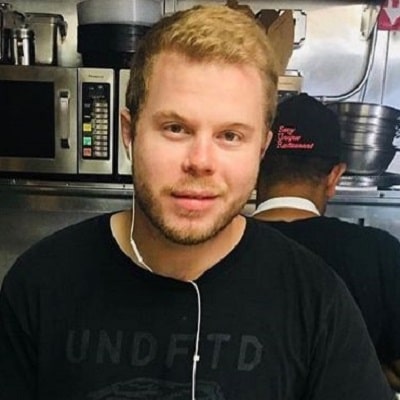 Max Todd is possibly single and not dating anyone at the moment. Previously, he was in a romantic linked with Billie Lee. They also revealed that their past hookup was a one-time thing and they had fun together. But, as of now, they are only friends and they are living their individual life happily.

Who is Max Todd?

Max Todd is a British reality TV star who is best recognized for his appearances on a reality show, ‘Vanderpump Rules’.

He was born on 7th December 1991, in England, the United Kingdom to British parents. His horoscope is Sagittarius and he is the adopted son of Lisa Vanderpump (mother) and Ken Todd (father). He previously lived with a foster family and he was adopted when he was six months old. He has his older sister named Pandora and a half-brother, Warren(property developer) who is his mother, Lisa’s son.

Max holds British citizenship but his ethnicity is unknown.

Todd came into limelight because of his parents. Following his mother’s footstep, he has appeared on his mother’s reality TV show, ‘Vanderpump Rules’ and he has also worked at his parents’ restaurant, SUR. At the moment, he might be busy traveling.

Talking about his mother, Lisa Vanderpump who is a British television personality and is widely famous for playing on Bravo’s The Real Housewives of Beverly Hills, Vanderpump Rules, ABC’s Dancing with the Stars, and so on.

Lisa debuted her film career in the year 1973 when she appeared in A Touch of Class. Since then, she has appeared in various movies, music videos, and TV shows such as Vanderpump Rules, Leap in the Dark, The Real Housewives of Beverly Hills, ABC’s Dancing with the Stars, Something in Disguise, Absolutely ABC, Silk Stalkings, and Baywatch Nights, G.U.Y, and so on.

In addition, his father, Ken Todd is a British-American is a well-known restauranteur and has more than 2 dozen restaurants in the cities of London and Los Angeles. Previously, he also worked in the textile industry before purchasing his first bar called Corks.

Ken began his professional career as a businessman and came into limelight after his appearance in the Bravo TV’s reality series, Real Housewives of Beverly Hills. Currently, Ken and his wife Lisa have owned more than two dozens restaurants. They have much joint investment in the restaurant business across the United Kingdom and the United States such as Bar Soho, Villa Blanca, The Shadow Lounge, PUMP, among others.

He has a height of 5 ft. inches and has light brown eyes and light brown hair. But, information about Max’s shoe size, dress size, etc. are not available.