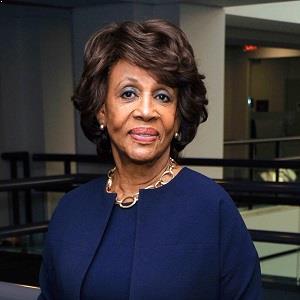 Guess what this liberal would be all about? This liberal will be about socializing...uh, um...Would be about, basically, taking over, and the government running all of your companies

What is the relationship of Maxine Waters?

Maxine Waters has been married to Sidney Williams who played professional football in the NFL. The couple married in 1977.

In addition, he is also a former U.S. Ambassador to the Bahamas under the Clinton Administration.

She was previously married to Edward Waters from 1956 to 1972. They have two children from this marriage, Karen Waters, and Edward Waters.

Who is Maxine Waters?

Maxine Waters is an American politician. Presently, she is serving as the U.S. Representative for California’s 43rd congressional district.

Previously, she was the U.S. Representative for California’s 35thand 29th districts.

Waters was born in St. Louis, Missouri on August 15, 1938, to parents Remus Carr and Velma Lee. She was born as the fifth out of thirteen children and was raised by a single mother.

Throughout most of her childhood years, she grew up in St. Louis, Missouri. She is of American nationality. Furthermore, she belongs to an African-American ethnic background.

Maxine Waters initially worked in a garment factory and as a telephone operator.

Next, she began her work as a chief deputy to City Councilman David S. Cunningham, Jr. in 1973, and eventually, she entered the California State Assembly in 1976.

She received 79% of the popular vote to get elected to the United States House of Representatives for California’s 29th congressional district.

From 1997 to 1998, she served as chair of the Congressional Black Caucus. In addition, she garnered more fame after she criticized President Barack Obama in August 2011 and again in October 2011.

She criticized U.S. involvement and opposed the 2004 coup d’état in Haiti. Additionally, she also voted against the Iraq War Resolution.

Maxine Waters has received the Bruce F. Vento Award from the National Law Center on Homelessness & Poverty. Additionally, she is also a proud recipient of the Candace Award, National Coalition of 100 Black Women.

Waters has not revealed her current salary. Furthermore, her net worth is estimated to be $1 Million.

She and her husband live in the Windsor Square neighborhood of Los Angeles near Hancock Park. Their property is worth $2.4 million.

Maxine Waters has been part of several controversies in her career.

Her criticisms of Barack Obama have made her the subject of several backlashes. Furthermore, she has also been accused of corruption over the years.

In addition, her views on several political subjects have also been criticized numerous times. At present, there are no rumors concerning her life and career.

Talking about her body measurement, there is no detailed information available regarding Waters’ height and weight.

Her hair color is dark brown and her eye color is black.

In addition, she has over 388k followers on Instagram. Similarly, her Facebook page has more than 366.9k followers.

When did Maxine Waters get married?

Did Maxine Waters go to college?