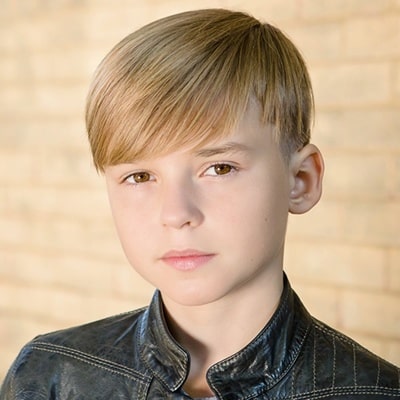 Maxwell is very fond of music, as he sings and plays the mandolin for the band Cowboy Jesus and the Sugar Bums. He is also very fond of pets and owns a pit bull.

Who is Maxwell Jenkins?

Maxwell Jenkins is an American actor. Maxwell is famous for his roles in Betrayal and Sense8.

Also, he is portraying the role of Will Robinson in Lost in Space, Season 2 on Netflix.

Maxwell Jenkins was born on 30 April 2005 to Jeff Jinkins and Julie Greenberg Jenkins of Welsh and Askenazi Jewish.

His father Jeff is a former Ringling clown and his parents are the co-founders and directors of Midnight Circus in Chicago.

He has a sister, Samantha Jenkins.

Maxwell Jenkins began performing in Circus at the age of five. He performed acts like juggling, mandolin, and tightwire.

He made his first television appearance at the age of 12 as Oliver on ABC’s Betrayal.

Then, he made his appearance in the series Sense8 with Lana Wachowski.

In 2016, he made his feature film debut from A Family Man as a young boy fighting leukemia.

In 2018, he portrayed the role of Will Robinson in Netflix’s series Lost in Space.

In 2020, he will be appearing as Joseph Bell in Good Joe Bell.

In 2019, Maxwell was nominated for Saturn Award for Best Supporting Actor in Streaming Presentation.

Maxwell is a blond with light brown eyes.