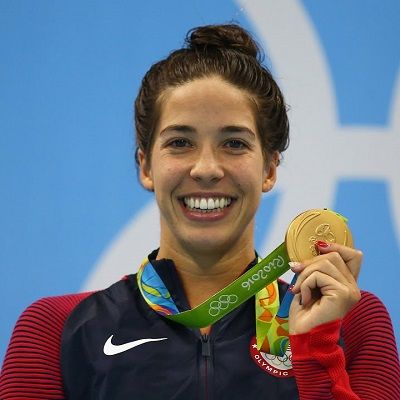 I was raised by two strong Christians in my parents, Marit and Ruben. I always attended church growing up but started questioning my beliefs as a teenager. They were supportive of this and, through some investigating and lots of reading and talking with mentors, I came to know and follow Christ and make my faith my own. It’s been a long journey since that time, but Jesus has been a constant as I grow and see him shaping me in new ways.

They’ve just been very supportive and helped me find motivation when I may have been lacking. Their biggest role was reminding me that success is whether I prepared and executed as well as I possibly could. It’s never been about winning or beating other people.

I’m motivated by seeing how good I can be. That applies not just at race time but during every practice: Am I preparing as well as I possibly can, even when we’re nine months out from the big meet? I set high goals for myself and then enjoy the process of working toward them.

What is the relationship of Maya DiRado?

Maya DiRado is married to Rob Andrews. Andrews is a Software Engineer by profession. They married on the 19th of September 2015.

Her Instagram posts suggest that she loves cycling, Playing Basketball, and traveling. She is a foodie by heart.

Who is Maya DiRado?

Lately, she is associated with the non-profit organization, King Philanthropies as a Portfolio Manager.

Maya DiRado was born on the 5th of April 1993 in San Francisco, California. Her father, Ruben DiRado is from Argentina, and her mother, Marit DiRado- Parker is of Norwegian descent. She has a sister, Sarah.

In 2010, Maya graduated from Maria Carrillo High School, Santa Rosa. Before that, she attended Santa Rosa High School where she started swimming along with her fellow Olympics Teammate, Molly Hannis.

Later, she graduated from  Stanford University, California with Honors in Management Science and Engineering.

During their first year of University, she competed in the Division 1 NCAA Championships. In the championship, she came second in 200 Yards (IM) and third in 400 Yards (IM).

-2017, associate with McKinsey & Company as a Business Analyst.

She is a hazel-eyed brunette. Her height is 5 feet and 9 inches and weighs around 65kg.