Maya Hawke is currently in a relationship with a mystery man. She introduced her boyfriend via social media in February 2019 but she has not revealed his name

Hope, she will soon come in front of the media with his identity. 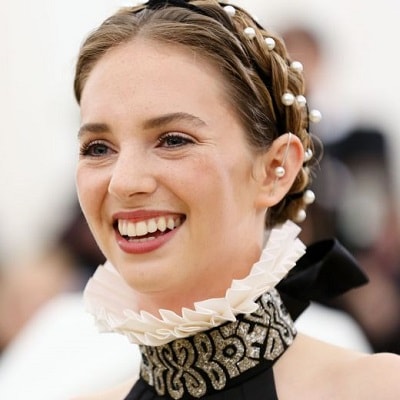 Reminding myself that listening is just as important a creative act as thinking is key for me.

In general, I feel very happy with how I got to have time on my own at least a little bit outside of the public eye.

The world of celebrity that comes with the world of art is not particularly interesting to me.

Who is Maya Hawke?

Maya Hawke is an American model and actress who is well known for starring in ‘Little Women as Jo March and in ‘Stranger Things’ as Robin. Furthermore, she is also famous as the celebrity child of Uma Thurman and Ethan Hawke.

She was born to her mother Uma Thurman and her father Ethan Hawke, who are both actors. She has a younger sibling, brother Levon Roan Thurman-Hawke. Her grandparents were also in the entertainment business.

Her father remarried after her parents divorced in 2005. She has two half-sisters from his father’s side and a half-sister from his mother’s side named Rosalind Arusha Arkadina Altalune Florence Thurman-Busson, or simply Luna.

Maya holds American citizenship but her ethnicity is a mix of English, German, Northern Irish, and Scottish.

She attended Saint Ann’s School and then she enrolled at the performing arts school Julliard but dropped out after a year to star in Little Women. Maya has dyslexia, which resulted in her changing schools frequently.

She started her career as a model at a young age. She had the opportunity to model for Vogue.

In addition, she was chosen as the face of the British fashion retailer AllSaints’ 2016/2017 collection. Moreover, she has also worked with Calvin Klein’s underwear range.

She landed the role of Jo March in 2017’s Little Women while she was a student at Julliard. After that, she appeared in 2019’s ‘Stranger Things’ as Robin, a main role in the series.

Moreover, she appeared in the films ‘Once Upon a Time in Hollywood’ (2019), and ‘And Lady world’ (2019). Likewise, she will appear in the films ‘Human Capital’ and ‘Mainstream’.

Recently, she played the role of Asteroid City Jamie Bernstein.

She was nominated for Women’s Image Network Awards in the category for Actress MFT Movie / Mini-Series for ‘Little Women’ in 2019.

She must have accumulated a decent sum of money from her career, she has not disclosed her exact salary and income.

Maya has been successful in keeping herself far from rumors and controversies in her personal and professional life.

She played a lesbian in her show Stranger Things, season 3. So, fans speculated her to be gay in real life as well. However, it is just a rumor that she is a lesbian.