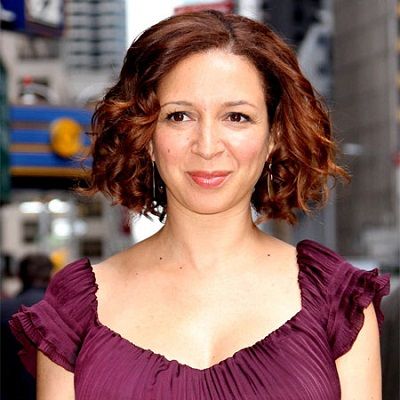 If there's ice cream present, ordering is a no brainer. I think all of us need to have ice cream whenever possible. My go-to is mint chip.

I've met people who are baffled by children, as though they were never children themselves. I think that people who don't like kids are awful people.

My mom was black and my dad is Jewish, and I lost my mom when I was seven ... That made me feel really different from other kids.

When I'm acting, I'm much taller and thinner in my mind. Then I see myself and I'm like 'Oh, right. I forgot. That's what I look like.''"

Then, she was in a relationship with an American Actor Chris Kattan, but they broke up.

Moreover, Rudolph came into a relationship with American film director and producer Paul Thomas Anderson in 2001.

Who is Maya Rudolph?

Maya Rudolph is an American actress, voice artist, comedian, and singer. Likely, Rudolph first gained prominence in the mid-1990s as a member of the alternative rock band The Rentals, before joining The Groundlings improv troupe later in the decade.

In the year 2000, Rudolph became a cast member on the NBC late-night sketch comedy series Saturday Night Live and subsequently appeared in supporting roles in films such as 50 First Dates (2004), A Prairie Home Companion (2006), and Idiocracy (2006).

Maya Rudolph was born in Gainesville, Florida, the United States on July 27, 1972. Her birth name is  Maya Khabira Rudolph and she is currently 48 years old.

Her father’s name is Richard Rudolph (composer, lyricist, and producer) and her mother’s name is Minnie Riperton (singer, songwriter). Whereas, her mother passed away due to cancer when Maya Rudolph was seven years old.

Talking about Maya’s education history, she did her schooling at St. Augustine by the Sea School during her teenage years and later graduated from the Crossroads School in Santa Monica, California.

She then enrolled for a course in photography at the University of California in 1990 and completed her graduation with a Bachelor of Arts degree from Porter College in 1995.

Talking about her profession, Maya Rudolph pursued her interest in comedy and began her career with the improv comedy troop ‘The Groundlings’. She was able to perform well and showcase her talent in acting during this phase. She also appeared in minor roles in movies like ‘As Good As It Gets’ (1997), ‘Gattaca’ (1997), and TV series ‘Chicago Hope’ (1996-1997).

During 2000, she got a major break in her career by joining ‘Saturday Night Live’ – a popular television live comedy show, as a featured player for three seasons between the years 1999 -2000. Along with her acting capabilities, her talent as a singer was often used throughout the show. In the year 2000, she also bagged a recurring role in the TV series ‘City of Angels’.

Likewise, in 2001, Maya got promoted as a cast member on the ‘Saturday Night Live’ show. She was much appreciated for her command over a wide range of accents that allowed her to portray different cultures and personalities with ease.

A few of the ethnicities she portrayed include Hispanic, Asian, North European, and Black. Similarly, she made her last appearance on the ‘Saturday Night Live’ show in November 2007. However, she appeared on the show as a guest in 2008, 2009 and 2010. Likely, she made a comeback on the show in 2012 as a host.

Whereas, her first major movie role came in 2006 with the film ‘A Prairie Home Companion’. She also co-starred in the movie ‘Idiocracy’ that released later that year.

Likewise, in 2014, a television pilot of Universal Television’s ‘The Maya Rudolph Show’ was aired. The show was an attempt to revisit the classic variety show format. Maya Rudolph co-produced and starred in it.

She won Best Female Vocal Performance in a Feature Film in a Supporting Role for Strange Magic (2015) at BTVA Feature Film Voice Acting Award in 2016.

This comedian has an estimated net worth of around $10 million and she has earned that sum of money from her professional career.

Currently, there are no desperate rumors regarding Maya’s personal and professional life. It seems she is doing the best job without harming others for which she hasn’t been a part of controversy yet.

But, she doesn’t have an official page on Facebook.