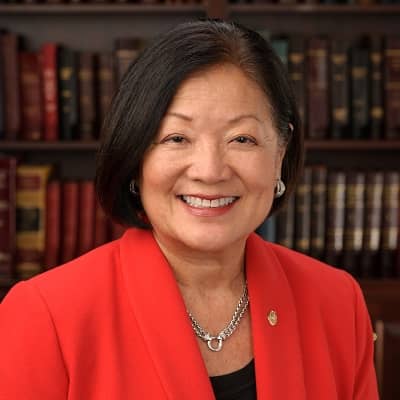 Mazie Hirono is married to Leighton Kim Oshima. The couple exchanged vows in the year 1989.

There isn’t much information about their marriage and children.

Who is Mazie Hirono?

Mazie Hirono is a Politician who is known for being a member of the U.S. Senate from Hawaii. She was the first elected female Senator and also the first Asian-American woman elected to the Senate.

Mazie was born on November 3, 1947, in Koori, Fukushima, Japan. Her father’s name is Hirono Matabe who was a Japanese veteran of World War II.

Her father was a compulsive gambler and alcoholic and used to abuse his wife. Mazie’s mother’s name is Sato Laurie Chie, an American citizen of Japanese descent.

Later her parents separated as her mother left his husband. Mazie and her brother Roy moved with their mother to her native Honolulu in 1955.

They weren’t financially strong at that time that Mazie used to work in the school cafeteria and had a paper route. Her mother was working for the Hawaii Hochi as a typesetter. Hirono then never saw her father. Later they knew that he has since died.

She holds an American nationality and is of Asian ethnicity.

Mazie earned a bachelor’s degree in psychology from the University of Hawaii in 1970. After a few years, she received a law degree from Georgetown University in 1978.

In May 2017, Hirono announced that she had been diagnosed with stage 4 kidney cancer. It had spread to her seventh rib. The cancer was discovered in a chest X-ray in April before minor eye surgery.

Hirono’s right kidney was removed on May 17, 2017, with a cyberknife procedure to treat the rib lesion.

Mazie Hirono has built her career as a Politician and now ranked on the list of famous and rich people.

She was first elected to office in 2012 by a margin of 25 points and was re-elected in 2018. Committees that Hirono serves on in the 116th Congress include the Armed Services and Judiciary committees.

Hirono is an average Democratic member of Congress. She can vote with the Democratic Party on the majority of the bills.

She also endorsed Hillary Clinton for the Democratic primary in the 2016 U.S. presidential election.  Likely, she was endorsed by The Brady Campaign. The campaign was to Prevent Gun Violence. She has also been involved in various other campaigns.

She defeated Ron Curtis in the general election for U.S. Senate Hawaii on November 6, 2018.

Hirono’s net worth is between $1.4 million-$3.6 million. She is in 52nd rank among the wealthiest people in the 100-member Senate.

The average U.S. House of Representatives congressional staff is paid $954,912.20. So she must have good earning being the politician.

Till the date, she has not been in any sort of rumors and controversies. Being a politician, her name is usually in the headlines of most of the news.

Mazie Hirono has black colored hair and black colored eyes. However, the information about her height and weight aren’t disclosed.