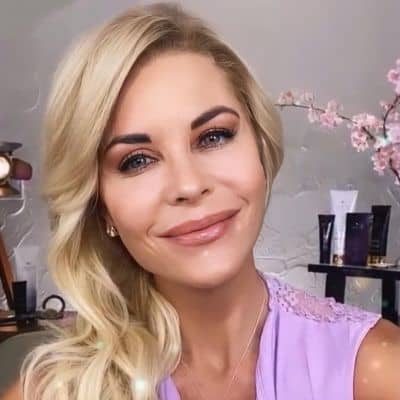 Mckenzie Westmore is in a married relationship with Patrick Tatpoulos. Patrick is the former judge of the Face Off show.

The duo met for the first time while working together on the first season of the show. Further, they married in Malibu, California at Chateau Le Dome at Saddlerock Ranch Winery. Their marriage took place on 11 October 2015.

Previously, she was in a married relationship with Keith “Seven” Volpone. Volpone is a well-named musician and lead singer of Whiskey Falls. The then couple married on 25 May 2002. Mckenzie met him on the Passions set during the shooting of an episode.

They had a child, Maddox, who was born on 21 May 2006. However, the couple got separated on 3 June 2011 without any disclosed reasons.

Who is Mckenzie Westmore?

Mckenzie Kate Westmore, popularly known as Mckenzie Westmore is a well-recognized American actress as well as a singer. Westmore is best famed for her role of Sheridan Crane Lopez- Fitzgerald on the television soap opera Passions from 1999 to 2008.

Moreover, she made an acting debut with Dose of Reality as Kimberly Stewart in 2012.

Mckenzie Westmore was born on 26 April 1977. At present, her age is 44 years old. Likewise, her birthplace is San Fernando Valley, California, the USA.

Mckenzie is the daughter of her father, Michael Westmore whereas her mother is Miriam Westmore. Her dad is a well-named makeup artist and her mother was a model for costume designer Edith Head. Moreover, she has two siblings as well.

Talking about her nationality, Westmore holds an American identity whereas her ethnicity is Caucasian.

Regarding education, the star attended the Los Angeles County High School and took her graduation degree in the Arts as a music major in 1995.

The acting industry has known Mckenzie for her best role of Sheridan Crane Lopez Fitzgerald on the television soap opera Passions from the year 1999 to 2008. She is well-recognized for her famous super couple pairing with Luis Lopez-Fitzgerald. The character was portrayed by Galen Gering.

Further, Westmore has featured as a guest on an episode of Friends as an anchor. Also, she made a guest appearance in season 3 of Dexter. The actress made a debut in the recurring role of Dr. Riley Sinclair on ABC’s daytime drama All My Children on 12 December 2008.

Going on, Mckenzie has also worked as the anchor of the Syfy original series Face Off, which is a reality competition starring makeup artists and competing for $100,000. Additionally, the actress has performed small roles in film and screen such as Star Trek: Insurrection(1998), Star Trek: Voyager (1995), Weird Science (1994), Star Trek: Next Generation(1987), and NBC’s Days of Our Lives (1965).

Westmore came into the limelight after portraying the role of Gwen Hotchkiss on Passion(1999).

Talented actress, Westmore has earned handsome money from her profession. She has acted in Oscar-winning movies as well. She has been active in her profession from 1980 till the present.

It is reported that Mckenzie Westmore has an estimated net worth of $2 million.

However, the prominent personality has not disclosed her exact salary, earnings, and assets details till now.

Mckenzie has never been part of any controversial matter or rumors till now. She has maintained a balance between her personal and professional life.

It seems that the actress favors enjoying her personal life and does not want to merge it with her professional life.

44 years old star, Mckenzie Westmore has gorgeous looks as well as a charming personality. She stands at a height of 5 feet 8 inches. Also, she has a balanced bodyweight of 63 kg.

Furthermore, Westmore has blue eyes whereas her hair is blonde. Her body measurement is 34-26-37 inches (chest-waist-hip) respectively.

Mckenzie wears a dress size of 6 (US).

She is also active on Twitter with around 107.8k followers.

Moreover, Westmore is also available on Facebook with nearly 38k fans and supporters.