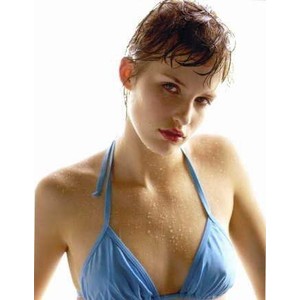 McKey is married as of now. She is in a marital relationship with long-term boyfriend, Sam Alvey. Sam is a mixed martial artist. They met for the first time in 2005. But they started dating after a couple of years.

After 4 years of dating, on August 7, 2011, Sam proposed McKey. Finally, they got married on January 19, 2013. The ceremony took place at the Wilderness Hotel in Wisconsin Dells, Wisconsin.

Since then they are living together happily. As of now, they have two children together. They are Reagan Quincy (born in July 2013), and Ival (born in October 2014).

Who is McKey Sullivan?

McKey Sullivan is a popular fashion model. Gorgeous McKey is famous among the media and fans as a fashion model. She worked as a print/online model. Additionally, she also does Runway modeling. Presently, she is a prominent figure in the media for winning the 11th cycle of “America’s Next Top Model”.

McKey Sullivan was born in Lake Forest in the state of Illinois on September 9, 1988. Her nationality is American and ethnicity is North American.

Modeling intrigued her from a very young age. This for sure influenced her later career. She was born to parents, Michael(mother), and Gayle Sullivan(father).

McKey Sullivan is a famous public figure involved in the profession of modeling. She actually got into modeling after she tried out for “Elite Model Look”. In 2008, she won the 11th cycle of “America’s Next Top Model”. Afterward, she became a popular face in the fashion industry. She appeared on the cover of “Seventeen Magazine”. Similarly, she agreed to a contract with ‘Covergirl’ cosmetics. Then she did several prints and online modeling. It included VOGUE, Wal-Mart, and others.

Furthermore, she is also a runway model. She walked for EиD by Eva and Delia, Mada van Gaans, G-star at Mercedes-Benz Fashion Week Fall in 2009, and so on. She is involved with several brands. And she gets paid a lot for the sponsorships and endorsements.

McKey Sullivan: Salary and Net Worth

She earns a pretty good amount of salary from her profession. For sure, she has a huge amount of net worth as of now. But unfortunately, information on such a figure is not available yet.

McKey Sullivan avoids the topics that can drag her into media controversies. Her clean image keeps her away from any controversies. She focuses on her work.

This avoids her from her any work-related criticism. Therefore, as of now, there are no rumors surrounding her professional and personal life.

McKey has a height of 6 feet. She has dark brown hair and blue eyes. Furthermore, her body measurements are 32-25-37 inches.