She was married to DeVon Franklin on June 16, 2012, in Malibu, California. He is a Columbia Pictures executive and a Seventh-day Adventist preacher.

Sadly, Franklin filed for divorce in December end 2021 after almost a year of marriage.

Meagan Good and Hosea Chanchez were romantically linked to each other from April 1995 to June 1998. Meagan met her first love, rapper Lil Wayne in March 1998, when the two were doing a show in Los Angeles.

They dated ON and OFF for three years until March 2001. Then, Meagan started dating the American actor, singer, and author, Tyrese Gibson. The couple broke up in April 2006 after dating ON and OFF for a couple of years.

They were romantically linked to each other from June to December 2005. She dated actor Jamie Foxx, who is about 14 years older than her. Likewise, she dated a football player, Thomas Jones for about three and a half years (from January 2007 to May 2010).

Moreover, Meagan dated rapper Soulja Boy from November 2008 to January 2009. There are 9 years of age difference between the two (Soulja Boy being younger than Good). 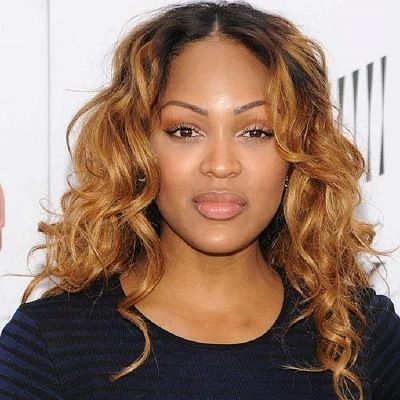 I love creme liner because I have lash extensions and sometimes the liquid liner can get into the lashes. It's also easier to guide. I can create straighter lines with it.

When I was growing up, I lived in a neighborhood that was largely Latino and I thought I was Latino!

Make sure your desire to do what you're aspiring to do is deeper than just fame and being a celebrity.

Who is Meagan Good?

Meagan Good is an American actress who has appeared in numerous television shows, feature films, and music videos. Likely, she started acting at the tender age of four and appeared in several television dramas before making her debut on the big screen.

Her breakthrough performance came in the role of a sexually charged teenager in the 1997 movie ‘Eve’s Bayou’ and she later went on to land a regular role in the kid-friendly sitcom ‘Cousin Skeeter’.

Her birth name is Meagan Monique Good, and she is currently 40 years old. Her father’s name is Leon Good (an LAPD police officer) and her mother’s name is Tyra Doyle.

Talking about Meagan’s education history, she attended the San Diego School of Creative and Performing Arts.

Talking about her profession, she began her acting career around the age of four. In the early stages of her career, she worked as an extra on television shows such as, ‘Doogie Howser’, ‘M.D.’, and ‘Amen’. At the age of 13, she was also cast in her first feature film, the 1995 hit ‘Friday’.

As, a teen artist, she appeared in single episodes of several TV dramas such as ‘ABC Afterschool Special’ (1996) ‘Pacific Blue’ (1997), ‘Touched by an Angel’ (1997), and ‘The Parent ‘Hood’ (1997-98). Additionally, she first gained critical recognition for her performance as a troubled teen in the acclaimed 1997 film ‘Eve’s Bayou’, alongside Samuel Jackson.

Whereas, from 1998 to 2001, she starred as Nina on Nickelodeon’s hit show ‘Cousin Skeeter’. Later, she appeared in small roles in movies such as, ‘3 Strikes’ and ‘House Party 4: Down to the Last Minute’. After featuring in various small film and television roles, she started auditioning for more mature roles in the early 2000s.

In the year 2003, she landed roles in several movies such as the action-drama ‘Biker Boyz’, and the romantic-comedy ‘Deliver Us from Eva’. Both films helped her transition from a child artist to an adult actress. In the same year, she also appeared in five episodes of the third season of the ABC television show ‘My Wife and Kids.

In 2004, she worked in the action flick ‘D.E.B.S.’, alongside Jordana Brewster, Sara Foster, and Jill Ritchie. Likewise, in 2005, Meagan Good starred in the horror film ‘Venom’ and the comedy-drama ‘Roll Bounce’.  In the year 2006, she portrayed the character of Coco in the urban action-drama ‘Waist Deep’.

Similarly, in 2007, she landed a role in the dance movie ‘Stomp the Yard’. In 2009, she starred alongside Gary Oldman and Odette Yustman in the horror flick ‘The Unborn’.

During 2011, she appeared in a number of films including the romantic comedy ‘35 & Ticking’ and ‘Jumping the Broom’. In the year 2012, she had a recurring role in seven episodes of the comedy-drama television series ‘Californication’.

Therefore, she has also appeared in numerous music videos by famous artists such as 50 Cent, Imajin, Lil’ Johnny, Memphis Bleek, Tyrese, and Will Smith.

Meagan Good was nominated for ‘The NAACP Image Awards’ and ‘Young Star Awards in recognition of her outstanding performance in the movie ‘Eve’s Bayou’ (1997).

She received nominations for the ‘Black Movie Awards’ and ‘Teen Choice Awards for her role in the drama-action film ‘Waist Deep’ (2006).

As of 2022, she has an estimated net worth of around $5 million and she has earned that sum of money from her professional career.

She appeared in a TV commercial about Wingspan.com (2000), G-Unit clothing line, Old Spice, LOV Magazine Promo, and many others.

There was a rumor that Meagan Good slept with Jamie Foxx, Lil Wayne, 50 Cent, and Nick Cannon. Currently, she is far from rumors and controversies.

Meagan Good has a height of 5 feet 5 inches and she weighs is 57Kg. Additionally, she has a measurement of 35-24-36 inches. Meagan’s hair color is black and her eyes color is dark brown.