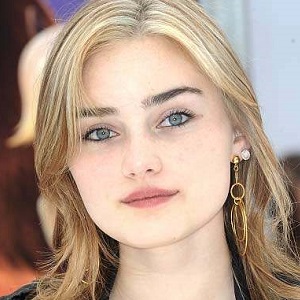 Meg Donnelly is dating Peyton Meyer(actor) from March 2018. The couple is currently appearing on the ABC show ‘American Housewives‘ in which they portray the role of boyfriend and girlfriend on the show. She stated that she loves to work with him on the show.

They are real and reel life couple. However, they have not revealed their future plans but we can hope to see them together in the future.

Previously, she dated Milo Manheim from July 2017 to January 2018. But, they both denied and told it was just a rumor and they are good friends.

Also, she had a celebrity crush, Chris Hemsworth(Australian actor), and once told in an interview that she appreciated him. His pictures were in her phone case and in the gallery too.

Who is Meg Donnelly?

Meg Donnelly is an American actress and singer who is famous for her role as Ash in the Netflix’s 2013 live-action/animated series ‘Team Toon’.

She is also popular for her role as Taylor Otto in the ABC comedy series ‘American Housewife’ since 2016.

She was born on July 25, 2000, in New York City, USA. She grew up in Peapack, New Jersey. She has not mentioned her parents. Meg holds American citizenship and her ethnicity is Caucasian.

She made her appearance as a featured vocalist in several Kida o the Arts, Broadway Kids and Time To Shine productions in New York City.

At the age of six, she took training in voice, acting, and dance at Annie’s Playhouse School of Performing Arts in Far Hills, New Jersey.

In the 2013 Netflix series ‘Team Toon’, Meg Donnelly co-starred as Ash. She was the understudy for the role of Louisa von Trapp in the NBC television special ‘The Sound of Music Live!’. She also made her appearance in several episodes of ABC’s ‘What Would You Do?’ and on ‘Celebrity Ghost Stories’ and ‘Sesame Street’.

She made her appearance in the feature film ‘The Broken Ones’ that premiered at the 2017 SOHO International Film Festival.

Since 2016, she ha been playing the starring role of Taylor Otto in the Abc sitcom ‘American Housewife’ and stars as Addison in the Disney Channel Original Movie musical ‘Xombie’ that premiered on February 16, 2018. She released her first single, ‘Smile’ on August 5, 2018.

It was announced in February 2019 that she would be rep[rising the role as Addison for a ‘Zombie’ sequel.

She has been successful in maintaining her net worth around $2.5 million from her professional career.

She often posts photos with Logan pepper but both of them have remained silent about their relationship.