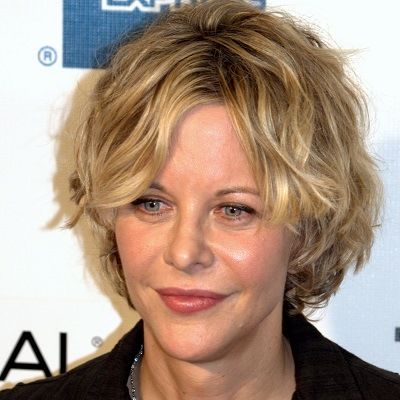 People say that chivalry is dead, I don't think that it's dead, I think it's just got the 'flu!

Clearly romantic comedy is my franchise genre, I don't mind saying that, it's true. I love doing them and hopefully always will do them. I don't feel particularly typecast because I think I do so many different kinds of things. Whether they're seen or not is another issue.

[in 2008 on why she hadn't been working very much recently] I've been famous since I was a teenager. There are a lot of empty spaces in that. I just feel like I've been filling in the cracks a little bit. I feel very fortunate, very free.

Meg Ryan and the actor and director, Anthony Edwards met each other during the shooting of ‘Top Gun.’ He had proposed to the actress after dating each other for some time.

The couple had also moved in together, however, the relationship did not work out.

Meg shared a short-lived romance with her Anastasia co-star John Cusack. Meg was in a relationship with the rock singer-songwriter, musician, painter, and occasional actor, John Mellencamp since 2010.

However, the couple once separated in August 2014, but reunited in September 2014 (the very next month), according to sources.

Who is Meg Ryan?

Meg Ryan is an American actress and producer. Likely, Ryan began her acting career in 1981 in minor roles before joining the cast of the CBS soap opera As the World Turns in 1982.

Subsequently, she also began with television commercials and then in several hit romantic-comedy films like ‘When Harry Met Sally’, ‘Sleepless in Seattle’ and ‘You’ve Got Mail’ in the 1990s.

Meg Ryan was born in Fairfield, Connecticut, the United States on November 19, 1961. Her birth name is Margaret Mary Emily Hyra.

Her father’s name is Harry Hyra (mathematics teacher) and her mother’s name is Susan Jordan (a former actress). Whereas, her parents divorced when she was 15.

Talking about Meg’s education history, she went to St. Pius X Elementary School, Fairfield. Later, she studied at the Bethel High School and graduated in 1979.

In college, she studied journalism first at the University of Connecticut and later, at New York University.

Talking about her profession, Meg Ryan debuted in George Cukor’s film ‘Rich and Famous’ (1981). Thereafter she played the character of Betsy Stewart in the daytime drama ‘As the World Turns’, from 1982–1984.

Around this time, she appeared in a Burger King commercial and as a result, several smaller film roles and television film followed, including a sitcom ‘Charles in Charge’, a horror-thriller film ‘Amityville 3-D’ (1983), and an action-crime comedy film ‘Armed and Dangerous’ (1986).

Similarly, in 1995, she featured in Lawrence Kasdan’s romantic comedy ‘French Kiss’ and two years later in 1997, she lends her voice to the lead role in the hit animated film ‘Anastasia’. Likewise, in 1998, she featured in ‘City of Angels’ and international blockbuster ‘You’ve Got Mail’.

In ‘You’ve Got Mail’ she once again paired her with Tom Hanks. She also appeared with Sean Penn in ‘Hurly-burly’ (1998). In the year 2000, she starred in Diana Keaton’s family comedy-drama film ‘Hanging Up’. She also appeared in the action thriller film ‘Proof of Life’ with Russell Crowe the same year.

Moreover, her last film of 2008 was ‘The Women’, a remake of the 1939 production. She also portrayed a wealthy woman whose husband is cheating on her with a shop-girl. Although the film received disappointing reviews, it became a worldwide financial success.

Similarly, in 2013, she filmed five episodes of her improvisational comedy series ‘Web Therapy’. Next, she featured in the ABC Family film ‘Fan Girl’ which premiered at the Los Angeles Film Festival in 2015.

During 2015, she made her directorial debut with a drama film, ‘Ithaca’ based on the novel ‘The Human Comedy’ by William Saroyan. Besides Ryan, the film also starred Sam Shepard, Tom Hanks, Hamish Linklater, Christine Nelson, and her son Jack Quaid.

During 1994, Meg Ryan won Harvard’s ‘Hasty Pudding Woman of the Year’ title and People Magazine dubbed her one of “the 50 most beautiful people in the world.”

In the year 1995, she was awarded the ‘Women in Film Crystal Award. Likewise, in 1998, ‘You’ve Got Mail’ earned her the ‘Blockbuster Entertainment Award for Favourite Actress – Comedy/Romance’.

She has an estimated net worth of around $45 million and she has earned around $15 million. Meg has endorsed many brands in the past and has appeared in various TV commercials and print ads for Japanese, Spanish, and American audiences.

She has also appeared in several national commercials for Barbie and other products as a teenager.

There was a rumor that Meg to be in a relationship with the New Zealander actor and musician Russell Crowe. Currently, she is far from rumors and controversies.

Her hair color is blonde and her eyes color is blue. Furthermore, her dress size is 6 (US) and her shoe size is 11 (US).

Meg Ryan is engaged! She flaunts her engagement ring in New York City!