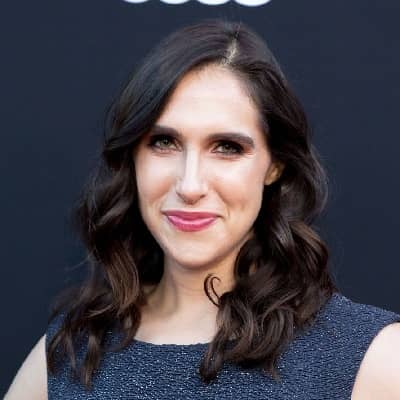 I kind of want everyone to think I'm a crazy person

I feel like plenty of people have normal-seeming families that, as they're growing up, feel awful. I'd rather have one that looks weird from the outside but felt really normal

My dream of dreams is to write Broadway musicals. All of this Twitter and TV writing is just a day job. Read more at https://www.brainyquote.com/authors/megan-amram-quotes

Megan Amram is quite secretive when it comes to her personal life. She hasn’t addressed any relationship yet and we can say that her relationship status is possibly single as of now.

Who is Megan Amram?

Megan Amram is an American comedian, writer, famous tweeter, producer, and also performer. Megan Amram is known for the NBC series The Good Place. where she has worked as a co-writer and producer.

Moreover, she also created and starred in the comedy web series, An Emmy for Megan which depicts Amram’s quest to win an Emmy.

Megan was born on September 3, 1987. Her birthplace is Portland, Oregon, U.S, and later moved to Los Angeles.

She was raised in a Jewish family. Megan was very close to her mom, Dr. Carol Ellen Lee. And she hasn’t disclosed her father yet. She also has a twin brother named Alec Amram, who is an ophthalmologist.

Her ancestry is Jewish and she belongs to American nationality.

She completed her high school education at Catlin Gabel School. Then she attended psychology at Harvard University graduating in 2010.

Being a student at Harvard, she wrote two of the Hasty Pudding Theatricals’ comedy drag shows along with her roommate and writing partner Alexandra Petri.

Megan came int0 the limelight in the year 2010 after posting jokes and other one-liners on Twitter. She is one of the popular Twitter vloggers famous for her comedy content. Her viral video “Birth Control on the Bottom” aroused Jezebel to provide her name as a “national treasure.”

Likely, Megan has also worked as a staff writer for the Disney Channel show A.N.T. Farm. Then she wrote for The Kroll Show. Other writing credits include The Simpsons, Transparent, Silicon Valley, Children’s Hospital,  Amazon series Transparent, HBO’s Silicon Valley, NBC comedy Parks, and Recreation, and many more.

Megan is also well known for her work on Parks and Recreation. She has worked on series like “William Henry Harrison,” “Anniversaries,” “Animal Control”, “Flu Season 2,” and “Ron and Diane.”

She has also written for The New Yorker. Moreover, her writings were also included in McSweeney’s, Vulture, Vice Magazine, and The Awl.

The writer has also built her career in acting. She debuted into acting from 2011 RuPaul’s Drag U. Likely, she also appeared on The CW musical comedy series Crazy Ex-Girlfriend. In the year 2015, she brings her first book  Science… For Her!. It was published by Simon & Schuster.

In 2018, she created, directed, wrote, and starred in the comedy web series, An Emmy for Megan, 2018. The series depicts Amram’s quest to win an Emmy Award. Its first series was nominated for two Emmy Awards and also the second series also earned two nominations for two Emmy Awards.

Just in Jan 2019, she was in an episode titled “I Need Some Balance”. She joined WGA writers standing against the ATA and the practice of packaging in 2019.

The star must have a good earning from her career and has a net worth of around $1 million. But her salary and other incomes are not disclosed.

After tweeting about Donald Trump on Dec 18, 2019, including different antisemitic and racist jokes and comments, she left Twitter sending an apology on June 17. She returned back on October 27, 2020.

There is no exact information regarding Megan Amram’s height and weight. Looking at her images, we can say that she has beautiful hazel eyes with dark brown colored hair.

She has amassed more than 1.1M Twitter followers enjoying her hilarious brand of off-beat humor.

Likely, the writer is also active on Instagram with over 60.1K followers. Furthermore, She has her own YouTube channel with 1.56K subscribers.

Megan is also active on Tumblr posting her different comedy content. But she is not available on Facebook.

You may also read the bio of Stephanie Allynne, Janeane Garofalo, Jeff Dye, and Patricia Heaton.