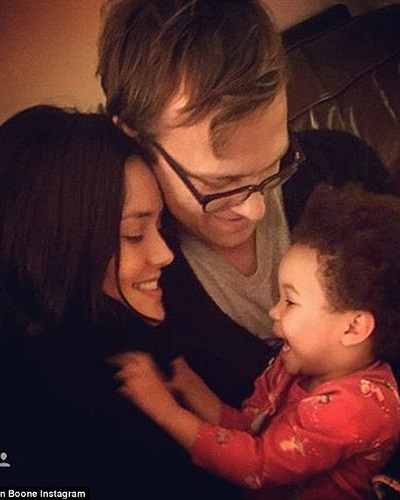 The Blacklist star Megan Boone shares a baby boy with her boyfriend, Dan Estabrook and they are planning to get married after sharing a baby.

Let’s dig deep into her personal life to know in detail!!!

Megan’s dating life and a baby

No doubt, Megan Boone is a very talented and beautiful actress. She has had a relationship with Boston-based artist Dan Estabrook for a very long.

The couple does not hesitate to reveal about their love life to the whole world and they are both blessed as they both care and support each other a lot and their relationship is no less than the married couples’ relationship, though they are yet to get married.

And in 2015, Megan Boone revealed that she is pregnant and she opened up that she shared the baby with her boyfriend, Dan.

Similarly, at the end of January 2016, she announced that she is all ready to give birth to her daughter with her boyfriend Dan Estabrook when she appeared in the Live Interview.

Megan welcomed her first baby to this wonderful world whom they named Caroline Boone Estabrook on April 15, 2016, at 5:33 AM. She shared her excitement and joy-ness at the time of her daughter’s arrival.

And she also captioned:

You may like to read The classy reporting and presentation by Christa Delcamp – the Emmy nominated reporter of NBC 10 Boston!

Any plans to get married?

She does not have any plans for the marriage before the delivery of her daughter. But after her daughter was born, she is now planning on marrying her boyfriend.

“We were definitely in it for the long-haul when we made a human.”

Though she is unmarried, she is living a happy life with a daughter and her boyfriend. If we take a look at her social media, we can see the posts with her boyfriend and daughter in which we can totally see the love and bonding between them. They are having qualitative time together.

Famous and talented Actress Megan Boone is more famous for her on-screen chemistry. She has really powerful and adorable chemistry with her co-star Ryan Eggold and there were talks of them having affairs with an on-screen partner, she told the clear answer saying NO.

It is clear that she is madly, blindly, and crazily in love with her boyfriend. And it is also clear that they will surely get married anytime soon.

Megan Boone is an American actress. She is famous for her work in the NBC drama series ‘The Blacklist’. Moreover, she is portraying the character Elizabeth Keen, an FBI agent. She also made herself appear in some of the films and television shows ‘Law & Order: LA’, ‘My Bloody Valentine 3D’, ‘Step Up Revolution’, etc. More Bio…

Fashion For The Positive Change!! Lupita Nyong’o’s ‘Fearless’ Fashion You Wouldn’t Miss To Watch; Check It Out Here
Tags : Actress NBC The Blacklist