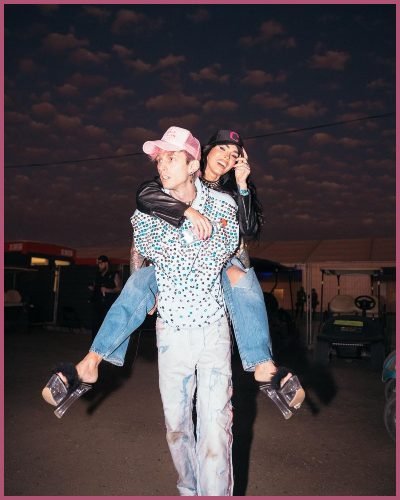 Yes, you heard right the couple is reportedly expecting as the rock star spoke about their ‘unborn child’ on the stage whilst calling Megan his wife.

Well, this is not the first time singer referred to his fiancee as his wife. But this is definitely the couple’s first hint about expecting their first child together.

The recently engaged couple Megan Fox and Machine Gun Kelly has sparked speculation that they expanding their family. On Sunday (May 15), the couple together attend the 2022 Billboard Music Awards in Las Vegas.

The event took place in the MGM Grand Garden Arena. The 32-years old rapper took a moment on stage while performing his hit track “Twin Flame”.

At the beginning of his performance, he mentioned,

“I wrote this song for my wife,”

His performance included the lyrics,

After the lyrics, he paused and said,

“And this is for our unborn child,”

As soon as he dropped the eyebrow-raising comments, ‘People in the audience turned to each other perplexed and said, ‘Wife’?’ an insider confirmed to E! News.

Whenever Machine Gun Kelly and Megan Fox have stepped out for a red-carpet appearance, the two pulled off the striking outfits. The couple arrived at the event in a coordinated black ensemble.

He then accessorized with a pink jewel in the shape of a teardrop on his face to match his candy pink hair. As usual, the lovey-dovey couple showed PDA on the red carpet during their interviews.

Further, it’s a double celebration for the couple as Megan, who turns 36 at midnight. She witched up her look with some texturized bangs and wore Pasquale Bruni earrings after the event.

Also read “Megan Fox & Machine Gun Kelly to be husband and wife! Proposed with an engagement ring worth?”

Megan Fox is an American actress and model. In the 2004 teen comedy Confessions of a Teenage Drama Queen, she made her film debut. She rose to prominence for her role in the 2007 blockbuster film, Transformers.

Likely, she is considered one of the model sex symbols. She was featured in several magazines such as Maxim, Rolling Stone, and FHM. See more…