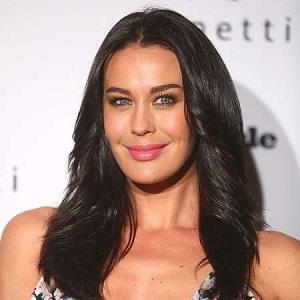 You are not selfish about anything. You become selfless, if anything, and it's a love you have never felt before. Your life becomes all about them and what you do revolves around them. I love it.

Reflecting on a personal life of Megan Gale, she is currently engaged to Richmond AFL footballer Shaun Hampson. The couple started being in a romantic relationship in January 2011 and they announced their engagement on 20 July 2017. The couple has been blessed with one son River Alan Thomas Hampson born on 13 May 2014.  Alan named after Megan’s dad and Thomas named after Shaun’s dad.

In May 2016, she suffered a miscarriage while 8 weeks pregnant with her second child. They are expecting a second child in September 2017. Previously, she was also in a romantic relationship with comedian Andy Lee in 2006 which ended in 2010. There isn’t information about her being in other relationship that we know of. Her personal life isn’t in the limelight as her career path is. Being a celebrity, her fans are always curious to know more about her.

Who is Megan Gale?

Bold and beautiful Megan Gale is an Australian model, brand ambassador, fashion designer, and actress. She rose to fame when she became the host of Project Runway Australia in 2011.

Multi-talented Megan Gale was born in Medina, Western Australia on 7 August 1975. She was born to an English father and Maori descent mother. Her family named her Megan Kate Gale when she was born. She grew up with her two elder brothers. She has an Australian nationality and has a mixed ethnicity of English and Maori.

Gale seems to be a pretty private person who hasn’t revealed much regarding her personal life. There isn’t much information about her early life and childhood. She studied at John Curtin College of the Arts in Western Australia.

Gale started modeling after winning a modeling competition in her hometown at the age of 18. Then she rose to fame appearing in a series of advertisements for an Italian telecommunications company. She has been on the cover of  Australian Marie Claire, the Italian fashion weekly Gioia, Italian and Australian GQ, Italian Maxim and featured in editorials for Australian In Style and Vogue Italia.

Gale modeled for Italian fashion houses like Gianfranco Ferré, Genny, and Gai Mattiolo. She worked as a model for almost 15 years and then retired in January 2008. However, she did return to the runway and closed Alex Perry’s 2011 Melbourne Fashion Festival show. She also became an ambassador for L’Oreal Shampoo along with Gwen Stefani.

Besides modeling, she is also an actress who has appeared in numerous films. She showed up her acting skills in films like Vacanze di Natale, Bodyguards – Guardie del Corpo, Stealth, and Mad Max: Fury Road. She has also become the guest reporter for Nine Network travel show Getaway.

Similarly, she became a co-host of the nine-episode Australian documentary TV show What a Year together with Mike Munro. In 2011, she also hosted Project Runway Australia which was the country’s popular spin-off of the American version. Furthermore, she is also a fashion designer. She has launched a swimwear label, Isola in 2010.

Gale was criticized about her weight in her early modeling career. Similarly, she also suffered controversy when she nearly experiences death while shooting scenes for Mad Max: Fury Road.