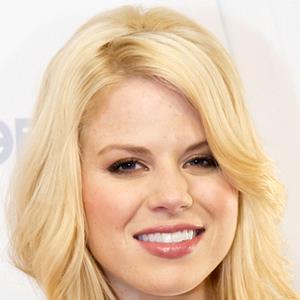 I met the man of my dreams at a gym, and then we got married in Vegas - because we're classy. When you meet at a gym, where else do you get married?

Being in a recording studio is a very different feel from performing onstage. I mean, obviously, you can't just go in and do what you would do onstage. It reads differently.

What is the relationship of Megan Hilty?

Megan Hilty’s personal life is as successful as her professional career. She is a married woman since 2013. She is married to her longtime boyfriend Brian Gallagher, an actor. They dated each other for several years before their marriage. After years of their love affair, the couple got married on 2 November 2013. Their marriage ceremony was held in Las Vegas, Nevada.

She gave birth to her first child, daughter, Viola Philomena Gallagher on September 18, 2014. She became a mother for the second time on March 13, 2017, giving birth to her second child, a son, Ronan. The couple has been together for three years now and their relationship is still going very well.

Who is Megan Hilty?

Megan was born on 29 March 1981, in Bellevue, Washington, USA. Megan holds an American nationality and she is of North American ethnicity.

Her birth name is Megan Kathleen Hilty. She is the daughter of Donna Hilty and Jack Hilty.

She attended Sammamish High School in Bellevue and shortly, transferred to the Washington Academy of Performing Arts Conservatory High School in Redmond. She also attended the Chrysalis School, Woodinville. She graduated from the Carnegie Mellon School of Drama with her Bachelor’s degree in Theater in 2004.

Megan began her acting career as a child artist in 1995, playing Jessica in an episode of the television film The X-Files (1995). She auditioned for the musical Wicked before graduating from Carnegie Mellon University. After graduation, she moved to New York City in 2004 and made her Broadway debut as the standby for Glinda, the Good Witch in Wicked.

She played the role for a year and ended her run on May 28, 2006. She was nominated for the “Broadway.com Audience Award for Favorite Female Replacement” that year. Same that year, she appeared as Mary in the stage show, Vanities. She appeared as Ruthie in the 2010 film What Happens Next. In addition to her stage work, Hilty has made guest appearances on various television shows including The Closer, The Suite Life of Zack & Cody, Ugly Betty, CSI: Crime Scene Investigation, Desperate Housewives, and Shark.

In 2008, Hilty joined Allison Janney, Stephanie J. Block, and Marc Kudisch in the musical adaptation of the 1980 musical film 9 to 5 which earned her nominations for “Drama League Award for Distinguished Performance and Outer Critics Circle Award for Outstanding Actress in a Musical” in 2009. She won the Broadway.com Audience Award for Favorite Featured Actress in a Play for Noises Off. She has appeared in numerous movies, TV films, and stage shows.

Megan Hilty: Salary and Net Worth

She has accumulated a net worth of $2 million as of 2022. But there is no information regarding her salary. Seeing her performance in her field we can assume that she earns a good salary.

There is no rumor of her present love affairs. She has been a straight person in her career and she has never been in any controversy in her entire life.

Find Out Why Megan Hilty Felt the Need to Talk about the Death of her Pregnant Sister, Brother-in-Law and Nephew!