It was revealed that Megan Rapinoe was found out to be a lesbian on July 2, 2012, and had been previously in a relationship with an Australian soccer player, Sarah Walsh in 2009.

They separated in 2013 and were again later rumored to be dating Sera Cahoone, a sub pop recording artist. They announced their engagement in August 2015 but the wedding never took place as this couple got separated.

She then began dating Seattle storm soccer player, Sue Bird, from late 2016. The couple is together at present. 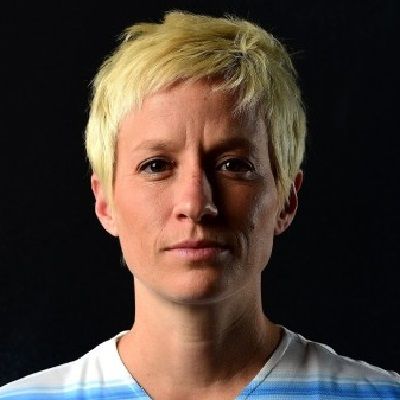 When we, as a nation, put our minds to something, when we truly choose to care about something, change always happens.

To say I am not mentally tired in ways and exhausted in ways would be a lie.

Who is Megan Rapinoe?

Megan Anna Rapinoe famously known as Megan Rapinoe is an American professional soccer player who plays as a winger for the American women’s soccer club, Seattle Reign FC, and US Women’s National Team.

She holds an American nationality and has Italian-English ethnicity.

She is the youngest among 6 children of her parents with the fraternal twin sister Rachel Rapinoe. Her twin sister is also an American soccer player.

She began training with her father in her early years.

She played with the south side of Elk Grove Pride in 2002. Furthermore, she also played for the University of Portland in 2005.

Talking about her educational background, she is an undergraduate from The University of Portland, Oregon.

She began her professional playing career with the American soccer club, Chicago Red Stars in 2009.

The American midfielder then joined American women’s soccer clubs such as Philadelphia Independence as well as Magic Jack in the 2011 season.

Rapinoe made her debut for Lyon at the UEFA Women’s Champions League and scored her first goal in the competition in the same match in the quarterfinal round of the 2012/13 season.

She is currently playing for the National Women’s Soccer League, Seattle Reign FC.

After playing for the US women’s team on their U-16 and U-19 sides, she made her international debut against Ireland in a friendly match on July 23, 2006.

Rapinoe scored her first international goal for the USA against Taiwan on 1st October 2006.

She has represented the USA at the 2011 FIFA Women’s World Cup.

Furthermore, she was a prominent player for the US team that won the Olympic gold medal at the 2012 London Olympics.

Rapine was the captain of the squad that had players such as striker, Christen Press as well as midfielder, Tobin Heath were contributed significantly to the US winning the 2015 FIFA Women’s World Cup in Canada.

Overall, she has made 135 appearances and scored 35 goals for the US team since making her debut in 2006.

Apart from soccer, she also spends her time on philanthropic causes.

In the year 2012, she won The Harry Glickman Professional Female Athlete of the Year.

The same year she gets the Board of Directors Award from the Los Angeles Gay and Lesbian Center for bringing awareness to LGBT people in sports.

Rapinoe’s net worth is around $3 million.

It was reported she used to earn more than $168,000 from playing for Seattle Reign FC. But her current salary is not disclosed.

There were different controversies spread, Why the president is feuding with Megan Rapinoe, star of the US women’s soccer team.

The beautiful soccer player, Megan Rapinoe has an athletic body.

She stands at a height of 5 feet and 6 inches tall. And her weight is 60 kg. Likewise, she has naturally blonde colored hair but dyed into different other colors and brown colored eyes.

Click down to know more about the bio, career, awards, net worth, body measurement, and social media of different personalities like Noelle Sheldon, Staz Nair, Bertie Highmore, and Cali Sheldon.

Megan Rapinoe replies to people those who call her unpatriotic! Know about her feud with Donald Trump!