She was also linked with G-Eazy. 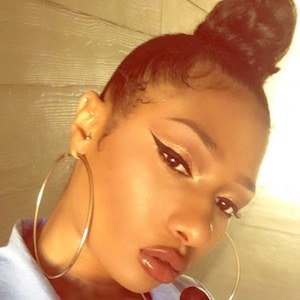 Who is Megan Thee Stallion?

Megan Thee Stallion is well recognized American rapper, dancer, and model. In November 2018, she signed with 300 Entertainment after she released her EP ‘Tina Snow’ in June 2018.

She was born on February 15, 1995, in Houston, Texas, USA. Her birth name is Megan Pete. Her mother’s name was Holly Thomas who rapped under the Holly-Wood.

Megan’s mother helped Megan to bring her to the studio instead of putting her in daycare. She told that her mother wanted her to rap and she began writing at the age of 14. Her mother supported her a lot in her career and Megan continued writing sexual and ratchet lyrics.

She took her stage name as Megan Thee Stallion because she was referred to as a stallion during adolescence because of her height and beauty.

Her mother passed away in March 2109 because of a brain tumor. She has not disclosed any information about her father.

Megan holds American citizenship but their ethnicity is African-American.

During her time at Prairie View A&M University, she battled against a male opponent in a Cypher and the video went viral. She posted her freestyle on her Instagram and gained many fans.

She resumed her study at Texas Southern University in health administration, where she is a third-year student as of 2019.

Megan Thee Stallion began writing at the age of 14. She released her first mixtape in 2016 which was titled ‘Rich Ratchet’. Later, she released Ep ‘Make It Hot’ in 2017 and released a video titled ‘Stalli (Freestyle)’ in the same year.

She released her first full-length album ‘Fever’ on May 17, 2019. Furthermore, On May 21, 2019, she released the music video for the opening album track “Realer”, which is inspired by the blaxploitation film style.

It seems the multi-talented actress has not been awarded or nominated for her work to date.

She has an estimated net worth of around $500k and she has earned that sum of money from her professional career. Her amazing and catchy lyrics are helping her to gain more fortune and fame.

There was a rumor that she dated Carl Crawford in 2018 but the rumor later turned out to be false.