Meghan King is The Real Housewives of Orange Country reality TV star. Meghan is currently not in a relationship with anyone. 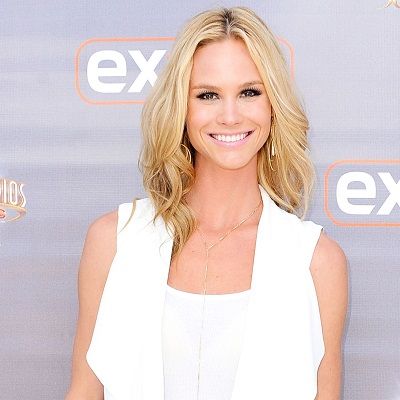 She was dating Christian Schauf since June 2020 but now the couple broke up after having an affair for six months. Despite their split, Meghan and Christian are said to be on good terms.

Previously, she was married to Jim Edmonds on October 24, 2014. Jim is a former All-star Baseball player and current St.Louis Cardinals Broadcaster.

The couple has three young kids together a daughter named Aspen and Twins boys named Hayes and Hart.

However, this marriage is on the verge of an end as a divorce case was filed in Oct 2019. However, this separation is not finalized yet.

Jim is having an affair with another woman named Kortnie O’Connor.

Who is Meghan King Edmonds?

Meghan King Edmonds is an American television personality. She is also a representative, product and retail development specialist at K. Hall Studio, and a Reality TV Star.

She also appears in the American reality show The Real Housewives of Orange Country.

Meghan was born as Meghan O’Toole King daughter of Kevin King and Julie King on September 24, 1984, in St. Louis, Missouri.

She is the eldest of her three siblings- Julie, Caitlin, and brother named RJ. Her ethnicity is Caucasian.

At Nerinx Hall All-Girl High School, she was a track and field star, completing in the triple jump and shot put.

According to an interview with her brother in 2011, she still holds the school records in the events.

She earned herself a marketing degree at the University of Mississippi.

Meghan King Edmonds Worked for pathology software companies like Ag Industries and Sun-quest Information System. She then made her appearance on reality TV while searching for her wedding gown for her engagement to Jim Edmonds.

Meghan then documented the 12th seasons of the TLC series entitled Say Yes to the Dress that was aired in 2014. Meghan is also a brand ambassador as well as the director of sales for the Swear Cosmetics.

She launched a hat company called Hashtag Hats,  with some sales going towards issues about which she is passionate, including cancer and human trafficking.

She reprised her role from the 10th-12th season of  The Real Housewives of Orange County that aired in summer 2016.

In October 2018, she was given a radio segment on 97.1FM and 590 AM in St. Louis, where she will be sharing those “must-haves” with her home town community.

She also has a line of personal care products and candles called The King Collection, featured at K. Hall  Designs.

Meghan has a net worth of $5 million as a reality TV star. Her earnings as a sales representative are $50k US.

Meghan King accused Jim of cheating on her with the family’s nanny, Carly Wilson. Later she announced their divorce in October 2019.

Meghan King Edmonds has blonde hair and blue eyes. She is 5 feet 9 inches tall and has 55 kg of weight.