Updated On February 2, 2023 | Published By: Clarence Bunn
Share this
Married 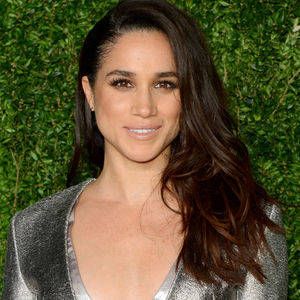 Who you are as a person will only be amplified once you are 'famous,' so if you had a good heart, then I would imagine you'll have the same good heart but the means to do even more with it

It's really important that young women be reminded that their involvement matters and that their voice is heard. Even if it feels like it's small, it really can make an impact

I think the biggest part of being a girl boss in the office, at home, or anywhere you go is just knowing your value.

Meghan Markle is a married woman. She was in a romantic relationship with Prince Harry of England and now she is married to him.

The couple tied the knot on 19 May 2018 in St George’s Chapel at Windsor Castle and millions of people had come to witness the Royal wedding.

They started dating in 2016 which made them the most searched couple on Google in the year 2016.

Prior to this relationship, she was married to Trevor Engelson on September 10, 2011, after dating since 2004.

Unfortunately, they divorced in August 2013. She didn’t have any children till now.

Regardless, she is enjoying a loving and caring yet challenging relationship with Prince Harry at the moment.

The wife of Prince Harry announced her pregnancy with the first child in October 2018.

The name of her child is Archie Harrison Mountbatten-Windsor who is the seventh in the line of succession to the British Throne.

Who is Meghan Markle?

Meghan Markle is an actress and humanitarian who hails from America.

She gained a lot of popularity and fame for playing the role of Rachel Zane in the popular legal drama series called Suits.

Furthermore, she was an ambassador for World Vision Canada working together with the United Nations Entity for Gender Equality and the Empowerment of Women.

Meghan along with her husband and son are staying in their LA house to avoid the coronavirus.

In this pandemic time, they are self-isolating and are not allowing any visitors.

However, in order to help needy people, they will leave their homes.

Harry and Meghan are delivering meals via a non-profit organization Project Angel Food.

She is the daughter of Doria Ragland, a clinical therapist and yoga instructor, and Tom Markle, a television lighting, and photography director.

Meghan spent her early life and childhood with her sister named Samantha Grant and a brother named Thomas Markle Jr.

She is of mixed ethnicity(Caucasian and African-American).

Reflecting on her education and qualifications, she completed her earlier education at Hollywood Little Red Schoolhouse.

Next, she completed her high school graduation from Immaculate Heart High School.

Later on, she enrolled at Northwestern University and eventually graduated with a double major in theater and international studies.

Meghan Markle initiated her career by working for the US Embassy in Buenos Aires. Also, she also worked as a freelance calligrapher.

She took on various contracts acting and modeling contracts including a role as a ‘briefcase girl on Deal or No Deal.

Later on, she started to work as an actor in an episode of soap opera named General Hospital.

Next, she appeared on television series such as Century City, Love, Inc., The War at Home, 90210, Knight Rider, The Apostles, CSI: NY, The League, and Castle.

Her major breakthrough came with the role of Rachel Zane in the legal drama series called Suits airing on USA networks.

Besides, she also appeared in several big-screen movies such as A Lot Like Love, The Candidate, Deceit, The Boys and Guide to Getting Down, Remember, Gets Him to the Greek, Dysfunctional Friend, and Horrible Bosses.

As a result of her successful career as a talented actress, she earned a lot of fame and fortune over the course of it.

Meghan was in the headline news after the revelation of her romantic relationship with Prince Harry.

They became Google’s most-searched couple in the year 2016.

Due to this huge attention, she faced a lot of criticism and pressure because of her mixed ethnicity.

She stands at the height of 5 feet 6 inches. Similarly, she weighs just 59kg.

Moreover, she has dark brown eyes and hair.

She has more than incredible 10.3 million followers on Instagram.

Moving Too Fast! Prince Harry Said Prince William Warned Him not to Propose to Meghan Markle Soon After Dating!

King Charles III is Reportedly Inviting Prince Harry and Meghan Markle to his Coronation in May, Despite their Netflix Drama!