Mekia Cox is a famous American actress as well as a dancer. She is married.

Mekia Cox is happily married to Britt Leach who is a basketball analyst.

The couple took vows on 28 April 2018 and are still madly in love with each other. Mekia cox’s whole looks were inspired by Princess Tiana. The duo has already started a family and has a daughter who was born in December 2018. So as of now, their daughter is 2 years old. 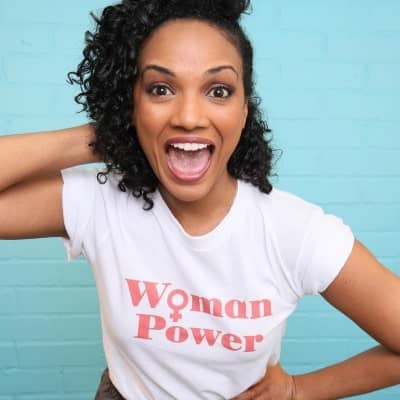 Who is Mekia Cox?

Mekia Cox is a famous American actress as well as a dancer. She is well known for her repeating role as Sasha in the second and third seasons of the CW drama ‘90210’ and her part as a dancer in the Michael Jackson concert series as well as the film ‘This Is It’.

Mekia Cox was born on 18 November 1981, so in 2021, she will be 40 years old. She was born in Saint Croix, U.S. Virgin Islands later, she was raised in Orlando, Florida. However, she holds American nationality and belongs to Afro-American ethnicity. Also, she falls under the zodiac sign of Scorpio.

The details and names of her parents are not given at the moment. Other information on her relatives, cousins, siblings are also not available as of now. At the age of seven, she moved to Orlando with her family.

Talking about her educational qualification, she graduated in batch 1999 from Dr. Phillips High School in Orlando, Florida, and passed university in 2003 with a Bachelor’s of Music degree from Florida State University.

During her summers, she played a role in Smokey Joe’s Cafe and Anything Goes one summer at the Heritage Repertory Theater in Charlottesville, Virginia.

Also, she presented a recurring role in the Nickelodeon sitcom Noah Knows Best during another summer and played club dancer and drug addict Mimi Márquez, the Chicago role of Liz, and Frenchie in Cabaret.

After graduation, she performed as Sarah in Ragtime, the musical at Merry-Go-Round Theater in Auburn, New York. For two years she toured as Carmen in Fame and revisited her role as Brenda in Smokey Joe’s Café. After she scored her first TV role, she moved to Los Angles and lives there now.

Mekia Cox is an amazing Actress and Dancer. Since her childhood, she was invited to participate in Disney’s Magic Kingdom Christmas Spectacular in 1989. Cox has shown up in Nickelodeon shows such as My Brother and Me, Kenan and Kel, and All That as a child actor.

She was one of two women chosen for the 11-member dance group from over 500 applicants for the This Is It concert series as well as the documentary film ‘Michael Jackson’s This Is It’. She can be seen dancing during the rehearsal of The Way You Make Me Feel” with Jackson. Further, she appeared on The Ellen DeGeneres Show to fulfill host Ellen DeGeneres’ birthday wish on 29 October 2009 as This is it, dancers.

She played the role of Lizzy Gilliam in the series ‘Undercovers’. Lizzy is a sister of the female lead who is unaware of her family’s involvement in Central Intelligence Agency activities. Cox played in the whole first season. In 2016, she acted in one of the episodes “The Cover-Up” of Modern Family. Cox took part in the series ‘Chicago Med’. She is also known for playing the character Tiana in the seventh and final season of Once Upon a Time. Later in August 2017, she was upgraded to the animated series ‘Regular Show’ and she played in 15 episodes in it. In 2019, she played a supporting role as Detective Nyla Harper in the second season of the ABC police procedural drama The Rookie.

Mekia Cox earns a net worth estimation of around $18 million as of 2022. Her main source of income is her acting career, dancing career, and voice acting career. Her salary and assets are still under review.

Mekia Cox has not been involved in any negative rumors and controversies yet. She seems to be very cautious and secretive when it comes to her personal life. Till now, she has maintained a rumor-free professional life.

Mekia Cox is active on many social media platforms. She has earned 69k followers on her Instagram account ‘@mekiacox‘ and on her Twitter she has gathered 11.7k followers under the username ‘@MekiaCox‘. She is also present on Facebook as ‘Mekia Cox‘.