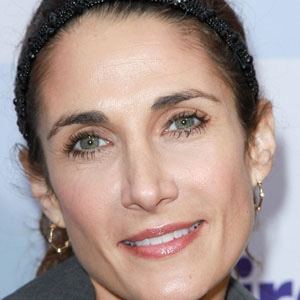 Ultimately, my greatest achievement is maintaining my career while sustaining a happy marriage and kids.

When you're the lead actor in a drama, you have 2 1/2 months at the end of a season to do other projects, and everything has to get done in that time.

It's a wonderful time when you sit down around the table for dinner and discuss life. No matter where you are, it gives the semblance of normalcy to my crazy world.

Melina Kanakaredes is a married woman. She is married to her college sweetheart, Peter Constantinides since September 6, 1992. They met for the first time when they were studying at Ohio State University.

Peter worked as a restaurant consultant and currently works as a chef and a restauranteur. Also, the couple opened the ‘Tria Greek Kunitz’ restaurant in Powell, Ohio but unfortunately, it closed down later.

The couple is living together and spending quality time with each other.

Who is Melina Kanakaredes?

Melina Kanakaredes is an American actress who is best known for her role in television drama as Dr. Sydney Hansen in ‘Providence’ from 1999 to 2002.

She is also widely recognized as Detective Stella Bonasera in ‘CSI: NY’ from 2004 to 2010.

She was born on April 23, 1967, in Akron, Ohio, USA. Her birth name is Melina Eleni Kanakaredes and she is currently 53 years old.

Her father’s name is Harry Kanakaredes(an insurance salesman) and her mother’s name is Connie(a candy company owner). She is a second-generation Greek-American. Her grandfather established the chocolate business which is run by her two maternal uncles.

Melina holds American citizenship and her ethnicity is Greek.

She attended the Firestone High School in Akron, and later enrolled in the Ohio State University before transferring to Point Park College in Pittsburgh, Pennsylvania.

Melina Kanakaredes began her television career from the role of Eleni Andros Cooper on the daytime drama ‘Guiding Light’ from 1991 to 1995. She made her breakthrough from the role of protagonist Dr. Sydney Hansen on ‘Providence’ which ran from 19911 to 1995 for five seasons.

Later, she appeared as Det. Stella Bonasera on the CBS drama series ‘CSI: NY’ but she left after six seasons. She made her appearances in ‘NYPD Blue’, ‘Oz’ ‘The Practice’, ‘The Ben Stiller Show’, ‘Saint Maybe’, and many more.

Her notable film appearances include the role of Trin in ‘The Long Kiss Goodnight’, as Nicolette Karas in ’15 Minutes’, Greek Goddess Athena in ‘Percy Jackson and the Olympians: The Lightning Thief’, and many more.

She has an estimated net worth of around $10 million but her salary and other earnings are not disclosed.

There was a rumor that she left the show ‘CSI: NY’ because of a low salary but she has not talked about the rumor.

Melina Kanakaredes has a height of 5 ft. 7 inches and weighs 59 kg. She has green eyes and dark brown hair. Her body measurement is 36-26-37 inches and her bra size is 34B.

To know more about Sarah Clarke, Kelly LeBrock, and Staci Keanan, please click on the link.