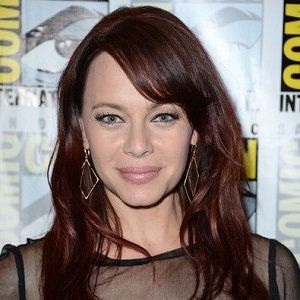 Throw in the humor, throw in that personality, try things you wouldn't normally try.

We had this scene where I'm supposed to be bending over to get something. I thought it was kind of cute.

I'm getting a lot of roles as women who are very powerful. I think that's a reflection of me as a person.

Melinda Clarke is a married woman. She is married to Adam Farmer after being in a romantic relationship since 2013. The couple tied the knot on the sandy shore of Dana Point, California, in September 2015.

Previously, she was married to Ernie Mirich on 28 June 1997 and One of her bridesmaids was Charlotte Ross. They have a daughter Catherine Grace Mirich born on 4 January 2000.

Who is Melinda Clarke?

Melinda Clarke is an American actress. She rose to fame for her daytime drama role on the popular soap opera Days of Our Lives.

Clarke is also famous for her role in CSI: Crime Scene Investigation, Nikita, and Vegas.

The daughter of John Clarke and Patricia Lewis, Melinda was born in Dana Point, California. She was born on 24 April 1969 and named Melinda Patrice Clarke.

Her father worked as an actor and her mother was a ballet dancer. She grew up with her sister Heidi and a brother Joshua.

Her sister passed away due to a malignant heart tumor in 1994. She is of Caucasian ethnicity and has an American nationality.

Clarke graduated from Dana Hills High Schools where she involved in Drama Club and school productions.

Talking about the career journey of Melinda Clarke, she is active in the entertainment field since 1989 and she is still active in it. She is also a trained soprano.

She began her career journey acting as a Faith Taylor in the television series Days of Our Lives in 1989. With her acting skills, she became successful to impress the fans and critics. In 1992, she debuted in the movie Hot under the Collor portraying the character of Monica. Similarly, she also appeared in the film Out of Blood as Laura in the same year.

In 1997, Clarke appeared in the three films, Spawn, Critics and Other Freaks, and Soldier of Fortune. She showed up as Lady Heather in the television series CSI: Crime Scene Investigation in 2001.

In 2003, she portrayed the character of the main cast Julie Cooper in the television series The O.C. Likewise, she also appeared as Melinda Clarke in Entourage and as Kelly Donovan in The Vampire Diaries.

She appeared as Amanda in the television series Nikita in 2010. As an actress, she has volunteered with the Young Storytellers Foundation.

This actress’s net worth is estimated at around $3 million. Moreover, her salary as an actor ranges from $19k-$210k per year.

Talking about the rumors and controversy, She suffered criticism for her second marriage with Adam Farmer. She was also criticized as one of the 50 hottest redheads of all time.