Melinda Gates is a philanthropist. She once served Microsoft as its general manager.

Melinda Gates is legally married but heading for the divorce. She exchanged vows with Bill Gates on 01 Jan 1994. But being together in a conjugal relationship for 27 years, they decided to live apart on 03 May 2021.

What really happened between Bill and Melinda?

The news of this wealthiest couple’s divorce has shocked the public. As per the reports, the reason for their disunion is the break of the patience level of Melinda.

She once said that her husband Bill was unsupportive and she had faced difficulties raising their kids alone. Bill also struggled to keep a balance between his personal and professional life.

Their wedding was a lavish ceremony performed in Lanai, Hawaii, and was attended by over 100 guests. The guests’ list included Warren Buffett, Katherine Graham, Paul Allen, and Craig McCaw.

The bride wore a beautiful white gown with a white headband on her hair. While the groom was also seen in a white tux with a black bow tie.

She met Bill for the first time sales meeting in New York and soon started to date each other. Their first daughter Jennifer Katharine was born in April 1996.

Then they welcomed their son, Rory John, and third child Phoebe Adele in May 1999 and Sep 2002 respectively.

Epstein and Bill met for the first time in the year 2011. Due to Jeffrey’s infamous image, Melinda was highly against her ex-husband being in contact with him. In 2013, she warned Bill against his relation with Epstein. 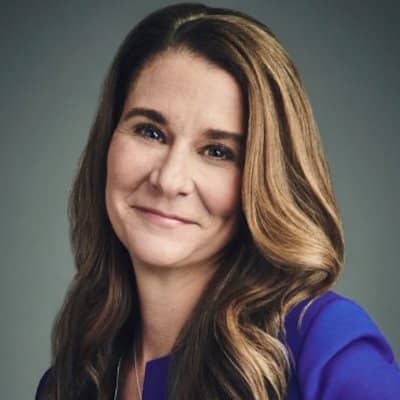 My background was computer science and business school, so eventually I worked my way up where I was running product groups - development, testing, marketing, user education

There's a false perception that women in Africa somehow don't love their babies they way we do, don't grieve their loss the way we would. That is simply not true.

Who is Melinda Gates?

Melinda Gates is an American philanthropist. She once served Microsoft as its general manager.

Moreover, Melinda is one of the founders of the Bill & Melinda Gates Foundation. It is considered one of the w0rld’s largest private charitable organizations.

For her work, she was placed under the 100 Most Powerful Women by Forbes ten times.

She was born as Melinda Ann French on 15 Aug 1964 in Dallas, Texas, United States. The name of her mother was Elaine Agnes Amerland and her father’s name was Raymond Joseph French Jr.

Her dad was an Aerospace Engineer while her mom was a homemaker. Melinda’s ancestry is Caucasian and has two younger brothers plus an older sister.

Talking about her academics, she is a pass out of St. Monica Catholic School and Ursuline Academy of Dallas.

Then she enrolled at Duke University to pursue a bachelor’s in Computer Science and Economics. She achieved the degree in 1986 and joined Fuqua School of Business.

From here, she got her master’s in business administration in 1987.

Melinda Gates served Microsoft for around nine years. She was appointed in 1987 as marketing manager and later became General Manager of Information Products. She left the job in 1996.

Then she served as a trustee for Duke University from 1996 till 2003. In 2000, she and her husband founded Bill & Melinda Gates Foundation. Its headquarter is in Seattle and deals in Healthcare plus education. Moreover, this company also assists in fighting poverty.

As of now, BMGF has employed more than 1.6k people and its assets are valued at $46.8 billion. Melinda also founded an investment and incubation company named Pivotal Ventures in 2015. As a writer, she wrote a book titled The Moment of Lift: How Empowering Women Changes the World.

At present, she collected an estimated net worth of around $70 billion. However, her salary and other earnings are unknown.

Her soon-to-be ex-spouse, Bill has assets of around $146 billion-plus he receives a salary of $1 million per year. Her family’s home is spread in 66,000 square feet and has a 60-foot swimming pool with an amazing underwater music system.

This philanthropist is keeping herself away from rumors and is also not surrounded by any desperate scandals. But the recent news of her separation from her husband has shocked the world.

Regarding Melinda Gates’s body features, her height is 5 ft 6 inches and her body weight is 60 kg.

Moreover, her eyes are dark brown, her natural hair color is light brown, and has a fair skin complexion.

Melinda is available on social sites. She is followed by over 2.4m and 2.5m people on Facebook and Twitter respectively.