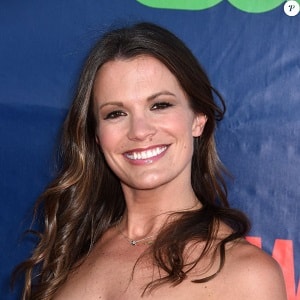 Melissa Claire Egan is a married woman. She has been married to Matt Katrosar on July 26, 2014. The duo got engaged in February 2013 and tied their knot in Santa Barbara, California.

After her marriage, she took his surname and she is now known as Missy Egan Katrosar. They were arranged to meet for the first time by their common friend Josh.

After dating, she told me that their first meeting had lasted for more than six hours. And she was the initiator to start their first kiss.

Who is Melissa Claire Egan?

Melissa Claire Egan is an American actress and she is famous for her character Annie Lavery on ‘All My Children’. She is also well recognized as a mysterious woman Chelsea Lawson on ‘The Young and the Restless’ and that character is probably her brightest screen work.

She was born on September 28, 1981, in Pound Ridge, New York, USA. Her father’s name is Dennis Egan and her mother’s name is Mary Egan. She has got two brothers, Ryan and Scott and she is the middle one.

Melissa was taken to acting class at the age of 10 by her mother. She was interested in acting since her childhood, but her mother insisted to go to college. She is also known as Missy and she spent most of the teenage and early age in Pound Ridge, New York.

Also, she is a big pet lover. Melissa holds American citizenship but her ethnicity is unknown.

She attended the University of North Carolina at Chapel Hill and graduated from there with a B.A. in Dramatic Art. After completing her education, she made her way toward Los Angeles.

Melissa Claire Egan started her character as a model. During her early career, she appeared in numerous commercials, and at the same time, she dreamed to become an actress.

Melissa made her debut appearance in an episode of ‘Dawson’s Creek’. After that role, she got the opportunity to portray a small role in ‘One Tree Hill’ which gradually rose her to fame.

She debuted her film career from the movie ‘Wrestling’ in 2005 as Ali Court. Also, she appeared on the daytime soap opera ‘All My Children’ as Annie Novak Chandler. The actress made her guest appearance as an exotic dancer on the season 6, episode 7 of CBS drama ‘Criminal Minds’.

On January 20, 2011, she made an announcement on her Facebook page that she made her decision to leave the show ‘All My Children’ and showed her love and respect for all the family of the show.

On October 3, 2011, there was an announcement regarding her joining the cast of ‘The Young and the Restless’. She portrayed the character of a mystery woman, Chelsea Lawson. But, she decided to leave the soap and confirmed on January 31, 2018, but it is further reported that the door would be left open for her to return.

Along with former AMC co-star Chrishell Stause, she works as a celebrity spokesperson for Proactiv Solution.

She was nominated for Daytime Emmy Award in the category Outstanding Supporting Actress in a Drama Series for ‘All My Children’ in 2009, 2011, and in 2012.

She was also nominated for the same award and category for the movie ‘The Young and the Restless’ in 2013 and in 2014.

She has an estimated net worth of around $4 million which she accumulated from her professional career.

She left the show ‘Young and Restless’ after a six-year stay. She thanked all the crew and the cast members of the series. But, she did not disclose the exact reason for her exit from the show.

Melissa Claire Egan has got a slim body with a height of 5 ft. 3 inches and she weighs 52 kg. Also, Melissa has got dark brown hair and dark brown eyes.

To know more about Julia Garner, Linda Park, and Laura Ramsey, please click on the link.

Storm Reid
Tags : All My Children American Actress The Young and the Restless