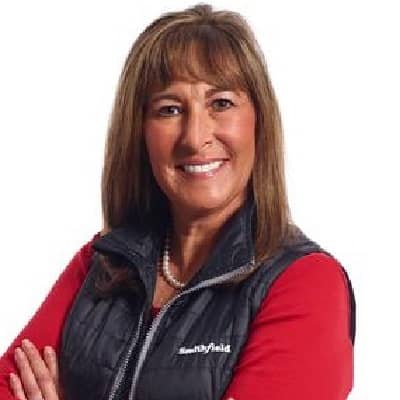 As of now, Melissa Cookstonis married. Her husband’s name is Pete. Details about their wedding are not disclosed.

They also have a daughter together named Lauren. Currently, she resides along her family lives in Hernando, Mississippi.

Melissa Cookston is an American chef, businessman, entrepreneur, and author. She is the owner of two restaurants also.

Likewise, she has written two cookbooks and is a seven-time world barbecue champion.

In addition, Cookston has won the top prize at the Memphis in May World Barbecue Championship twice being the only female barbecue world champion.

Melissa was born in Greenville, Mississippi in 1968. She hasn’t disclosed any information about her family and early days.

She belongs to American nationality and mixed (Scottish and English) ethnicity.

Details regarding her education and universities she studied are yet to be revealed.

Melissa Cookston has been worked in food preparation for years. She began cooking barbecue from the year 1996 and started entering in different competitions.

Likely, she also won various competitions also. In 2007, along with her husband, Pete quit their jobs and both of them started to tour on various barbecue contests across the country.

The couple opened their first restaurant, Memphis BBQ Company in the year, 2011. It has its restaurant locations in Mississippi, Georgia, and North Carolina cities.

Likewise, in October 2016, she opened her second restaurant, STEAK by Melissa, in Southaven, Mississippi. She still serves as the pitmaster of Yazoo’s Delta Q barbecue team.

The chef has also appeared on various national news and talks shows as well as cooking shows and Food Network. Since 2012, she has appeared on BBQ Pitmasters.

She has appeared on several shows like CBS This Morning, The Kitchen, Food Network’s Diners, Drive-Ins, and Dives.

As well as, she was seen on  Chopped, Last Call Food Brawl, the Today show, The Chew, Fox News, and on many other shows.

From  2017, Melissa revealed that she started breeding her own hybrid pigs. Cookston served a judge on Destination America’s BBQ Pitmasters too. Moreover, the chef was also named one of America’s most influential BBQ Pitmasters and personalities by Fox News.

She is sponsored by Prairie Fresh and is a frequent contributor to Prairie Fresh communications and marketing efforts. She is also an author of two cookbooks, Smokin in the Boy’s Room and Smokin Hot in the South.

She owns two restaurants and is one of the renowned chefs in the world. So she must have a good earning from her career. yet her net worth is under review.

This chef stands with decent height and weight. She has black colored hair and usually dyed it to blonde. Likely, she has a flair complexion with and dark brown colored eyes.

Likely, her Facebook page also holds around 20K following. Furthermore, she has her own YouTube channel with 4.27K subscribers.